You know the drill - I’ve been involved with Rails Girls for the last couple of years, and the 13th edition of the event was no exception. I won’t go over the details of what and how things happen - just check out my previous meaty post here. 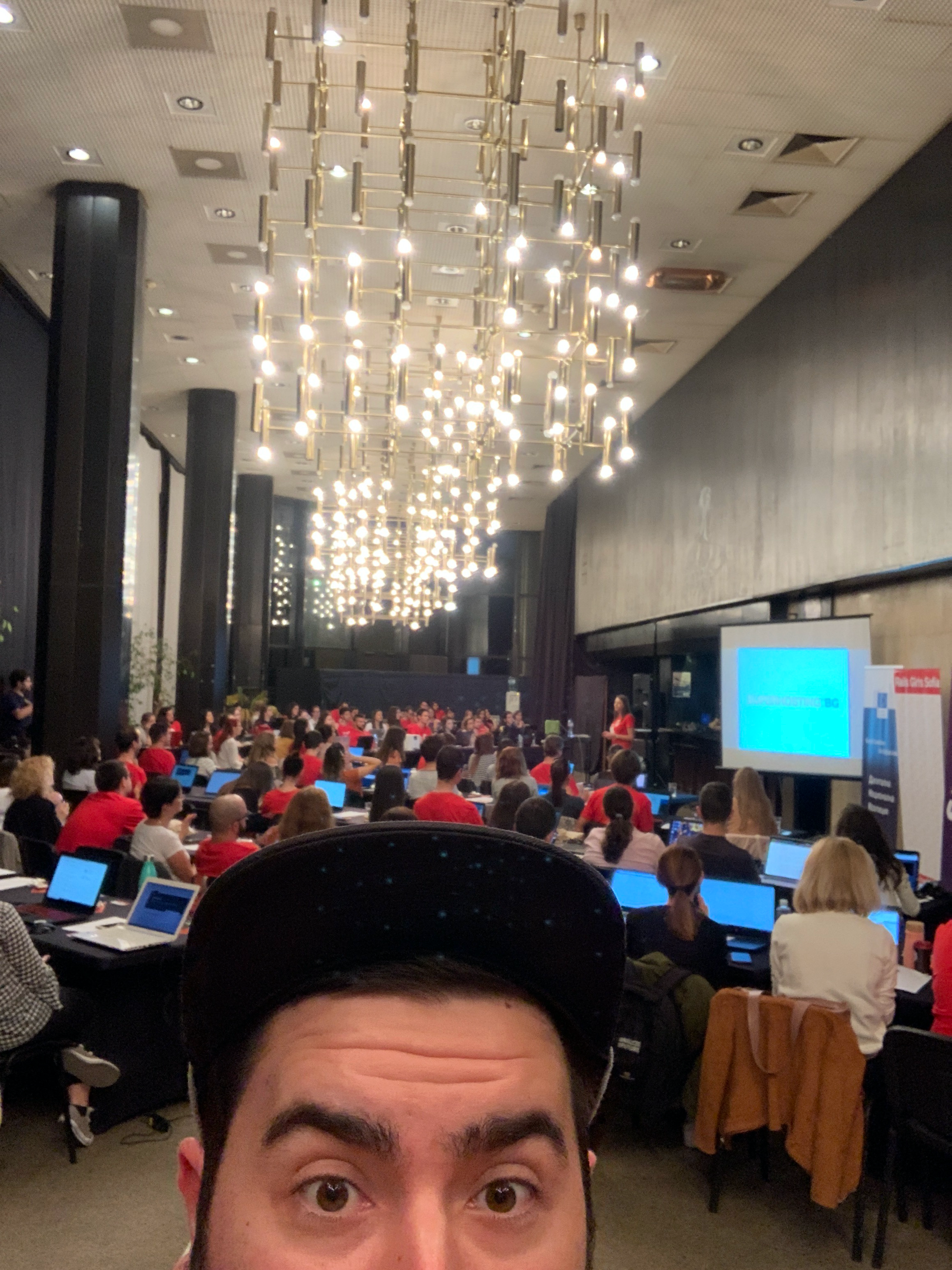 Moving to org team, sort of

That being said, we did a bit of a switcheroo this time, and I moved from an instructor role to more of an organizational assistant with some spice on the side. Rails Girls 13 was planned to be on a slightly smaller scale than the previous editions (80 attendees and 40 instructors instead of the old 100/50 split).

So, with less of a push for getting instructors to join in, I was free to think of something fun to do. They already had a talk slot planned for me, but I thought of going the extra mile and wanted to do some design and printing before and during the event.

Along with the rest of the team, we agreed on a few things for Rails Girls 13:

Design and print stuff for attendees

Our initial idea was for me to design and print event badges for everyone. On second thought, that seemed like overkill, mainly because badges serve a one time purpose and would probably be discarded or shoved in a box of useless things, never to be used again.

So we went a more practical route and agreed on bookmarks! They’re relatively small, easy to print, and actually serve a useful purpose. Here is what I came up with - just a clean basic bookmark shape with a logo and some text on top. There isn’t anything crazy innovative about it, but I do like the way the middle section connects to the main body/bottom of the ruby shape. Had it been one solid flat shape across the width, continuous flex and friction caused by the bookmark getting clipped to a book would have broken or warped the plastic flap in no time. However, with most of the material cut in favor of the ruby shape, that section is much stronger and also reinforced by the top bevel outline.

Here’s a render of the design, and a set of 30 bookmarks done in three batches: 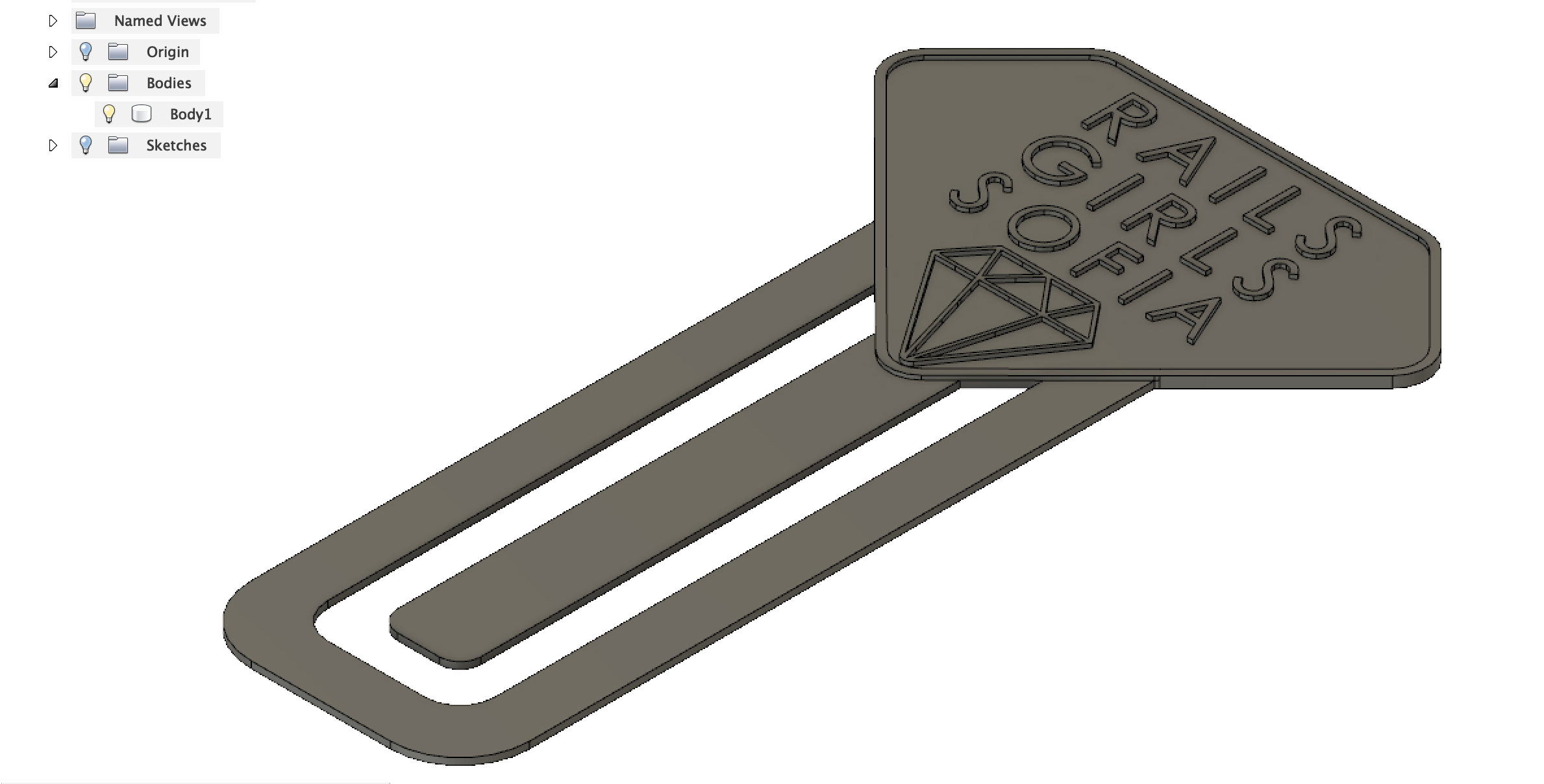 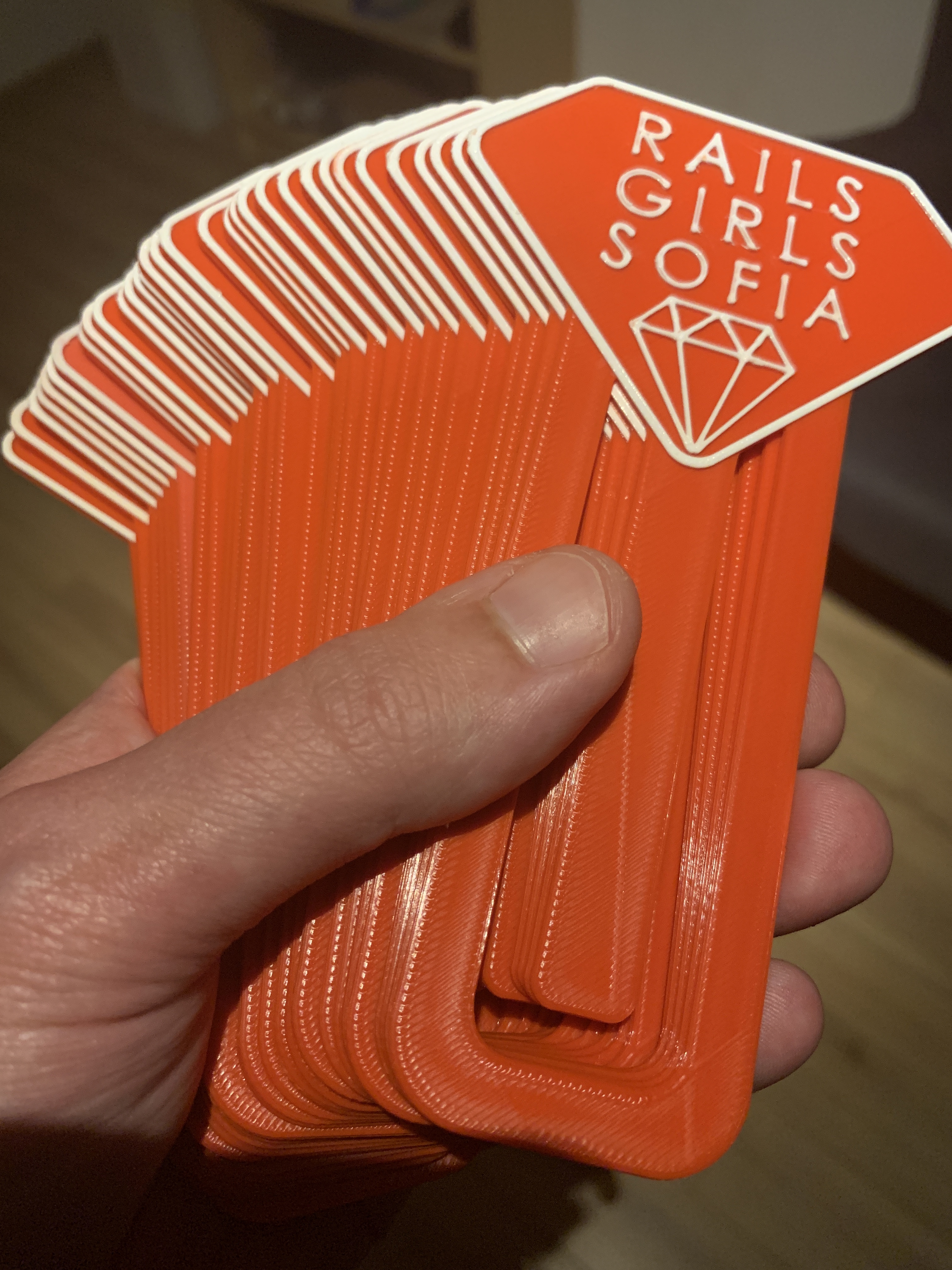 With the bookmarks done in a couple of days, I moved on to designing a piece for the event series.

That had to be something universal that anyone could use, representative of Rails Girls, and also carry over to future editions of Rails Girls.

What do people do when going to large events - take lots of photos.

What kind of photos - usually selfies.

How can we have the name of the event incorporated into selfies - with a large sign of some sort.

Can we make a promotional sign for Rails Girls - we sure can!

Here’s the final design - the front piece is just 800 micron thin, as I was really low on red filament and had no time to get another roll. That wasn’t going to last much without reinforcement, so a back brace was necessary to keep the label from warping and breaking. 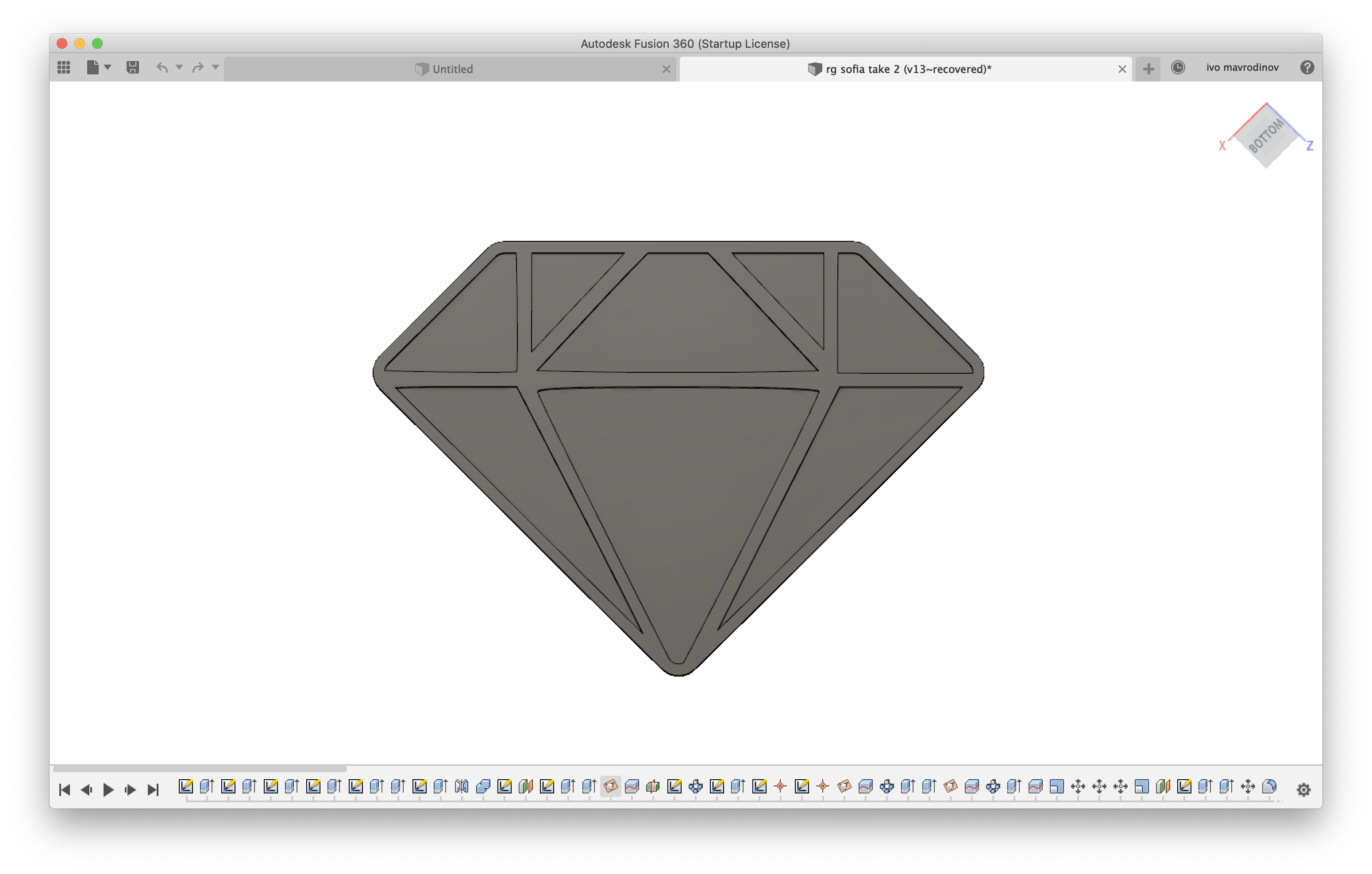 The front piece also has a diamond shaped slot for an additional small piece that’s fitted in. And that piece, in turn, has a V shaped slot on top that holds the number label - just a tight friction fit, so no glue was needed.

This way, we can keep reusing the main piece and only print out numbered labels for future events going forward.

Sadly, I don’t have any better footage of the finished piece, but hopefully there should be some better ones after event footage is out. 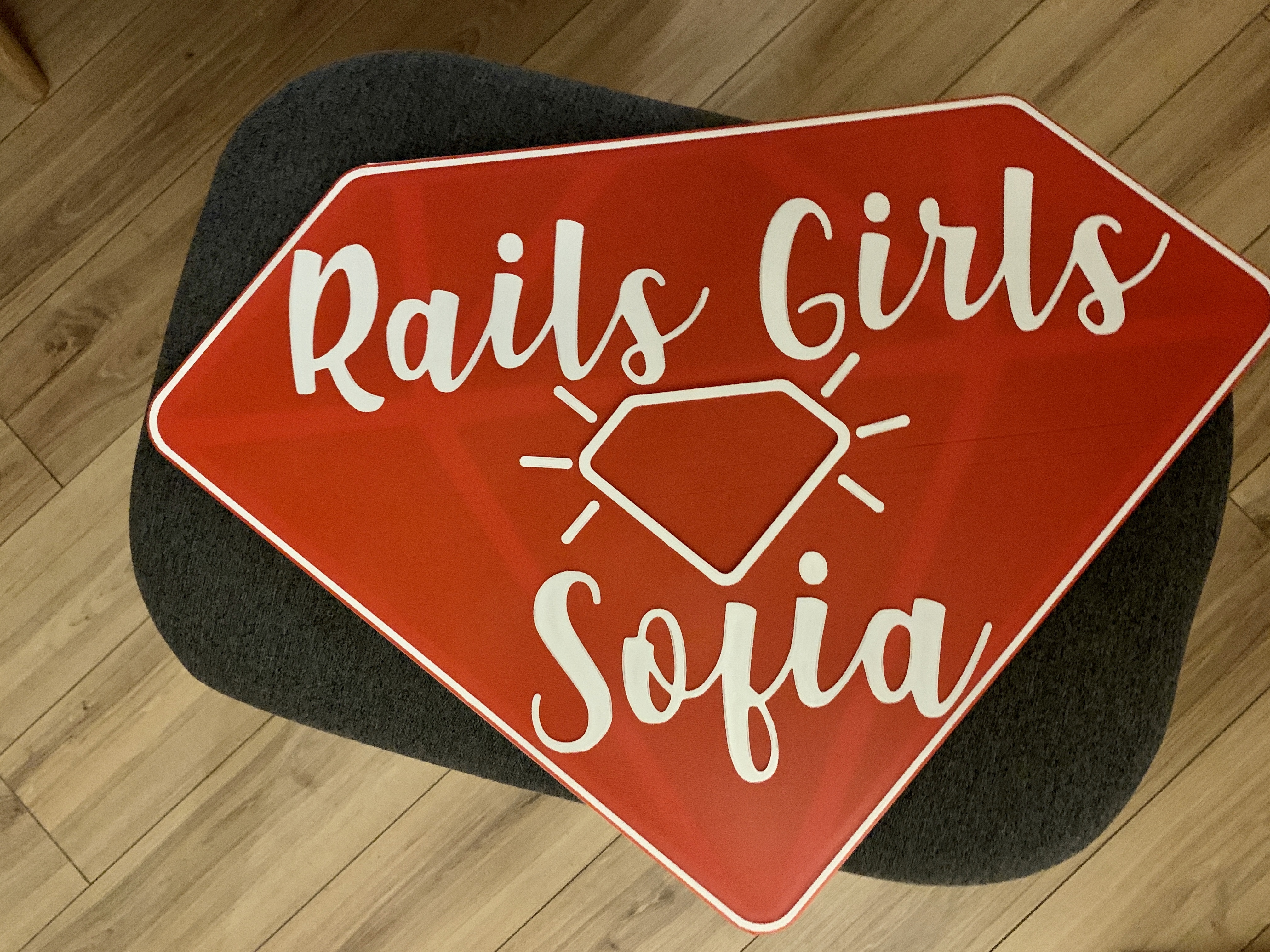 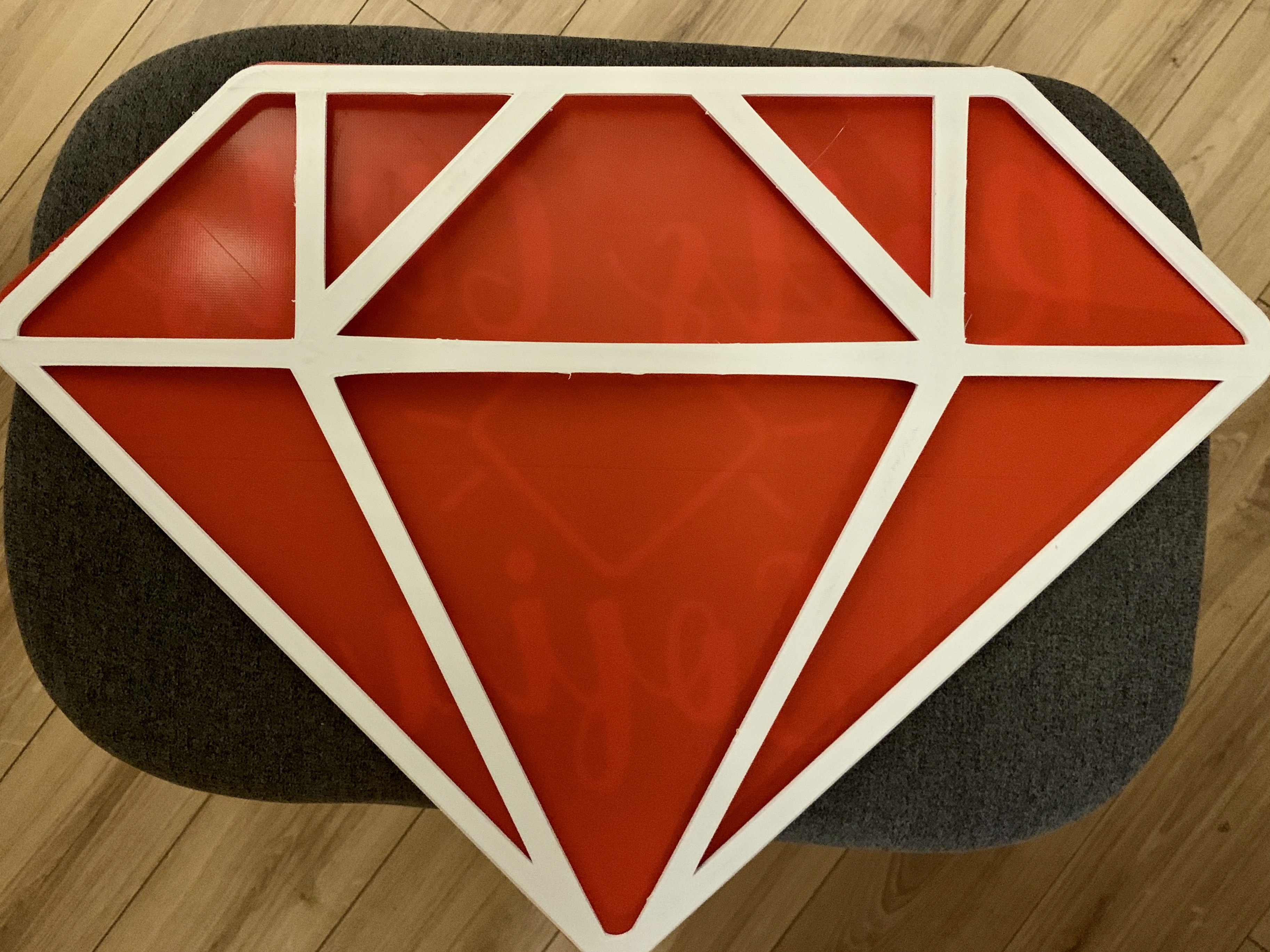 You might notice that the top red layer on the front side has a few areas where the layering looks messed up. By some stretch of a miracle, I was in my workshop and around the printer while it happened. It turned out that the wiring going from the control box to the extruder assembly on my larger printer started coming loose when the print head moved all the way to the left. So, with the plug loose, the print head was not receiving enough power to keep the temperature stable, resulting in a few spots where the plastic is not properly melted and squished to the rest of the layer. I managed to hotfix this by wrapping the whole cable bunch to the X axis carriage with a zip tie, and will deal with the issue more permanently later.

I was on the struggle bus all morning trying to get my Prusa up and running. That’s the ‘spare’ printer I keep at the coworking place and lug around at events and what not. Poor thing has thousands of hours of up time with almost no maintenance done - the print bed is sagging (making auto calibration difficult), the nozzle is halfway chewed up, and the X axis belt is starting to warp for some reason. But I managed to get the machine up and running after enough fiddling around, so people started flocking in to see what’s up. 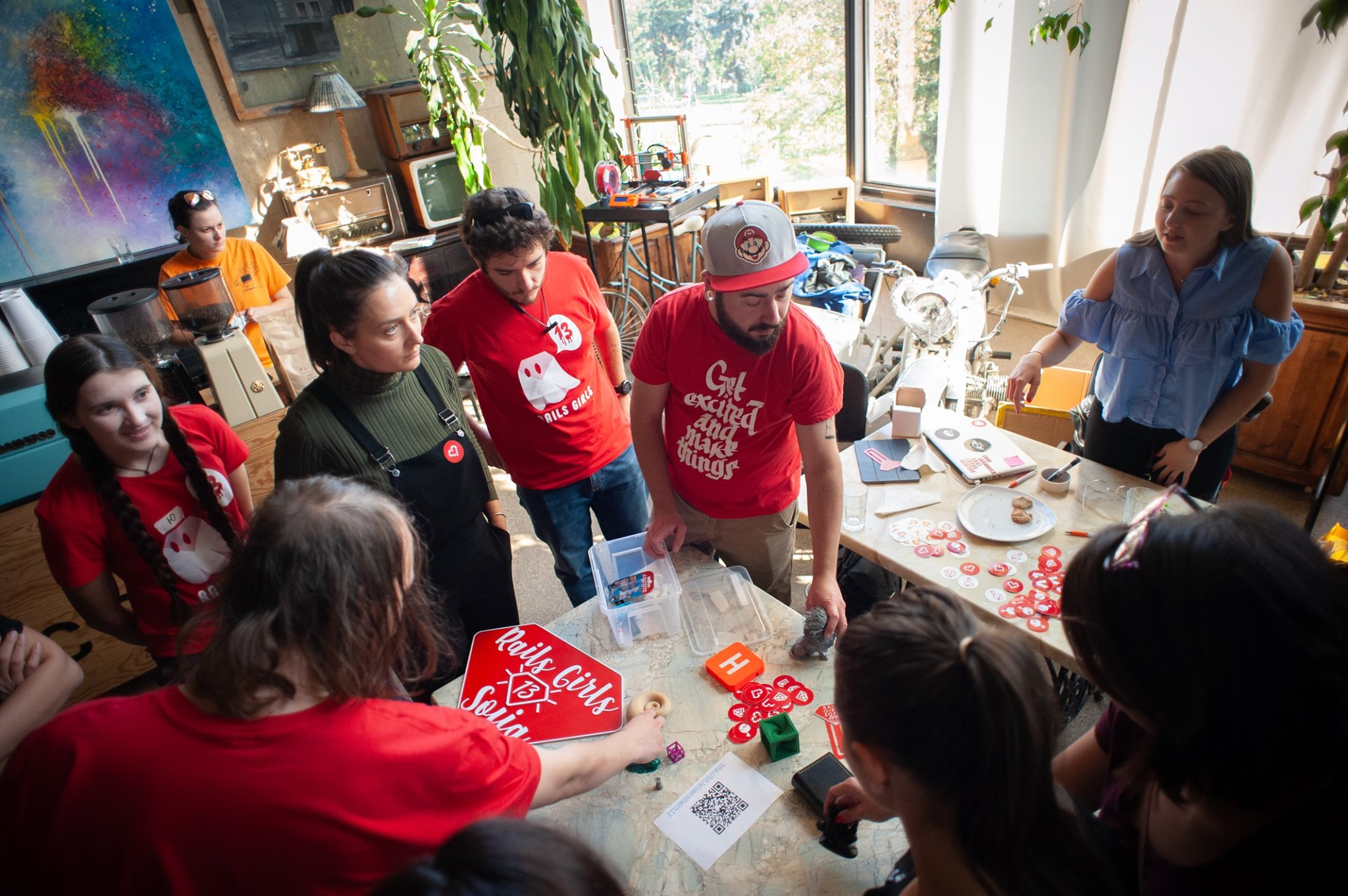 I was really surprised that a lot of the attendees had quite the knowledge about FDM printers, even in areas that go beyond most of the basics. We touched on rapid prototyping, sustainable printing, and the different types of machines used in various fields. Apart from the printer itself, I brought along a few rolls of different filament types, a box of various small projects done in the past, and my trusty copy of The 3D Printing Handbook - a must have for anyone in the industry.

Rails Girls 13 was a blast - we tried something new, had a productive and fun weekend, and everyone learned something new. Am I going to try something different next time - maybe. Or maybe I’ll switch back to being an instructor, we’ll see next spring.