Gucci from the crypt

Friend, it’s been a hot minute, but let me tell you something - I’m an absolute master of putting the pro in procrastination when it comes to blogging. JK, too much work, as usual.

Be that as it may, I’m starting a new series of giving you the brief of my micro obsessions - small scoped side quests I’ve been getting myself into lately. My approach is short and sweet - read up, research and then experience them in person. Just enough for my INTP brain to be satisfied before moving on.

We’re kicking it off with something quite cryptic (pun very much intended) for the pilot episode, namely my crazy 11 day Tesla trip around Europe that had a little bit of everything for everyone who was in that overrated car. What was my go-to destination you may ask - the bejeweled Catholic skeletons in Waldsassen; a small town in Bavaria just a couple of hours away from Prague.

A word of caution, tho - if you’re afraid of actual skeletons and/or are not keen on seeing the absolute lengths human beings are capable of going through to justify their religious beliefs, then feel free to skip this one altogether. You’ve been warned.

All paths lead to Bavaria

The image of catacomb saints has slipped into my life on a few separate occasions, though piecing everything together happened relatively recently.

Being interested in craftsmanship, I recall reading a paper on the evolution of hand tools and techniques in Europe over the years. The article focused on industrialization and manufacturing, but there was a segment on less technical areas and there was a picture of a catacomb saint with an excerpt going over fine gold work and precious stone faceting.

Fast forward some years, I spent a weekend playing Blasphemous on the Switch (for the initiated, that’s a very hard, very Catholic and very gory game by a small Spanish dev studio) when I had to battle a possessed catacomb saint main boss who whooped my ass so many times, that an online guide was needed to progress further. 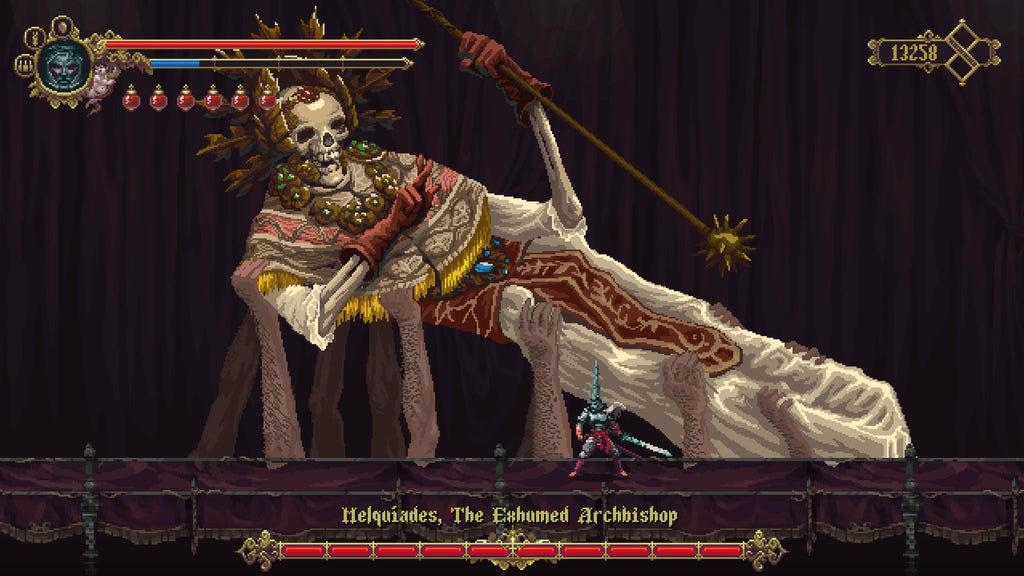 Last year I also got my hands on physical copies of Etmaal and Heven by O SAALA SAKRAAL, both of which feature images of catacomb saints as album covers: 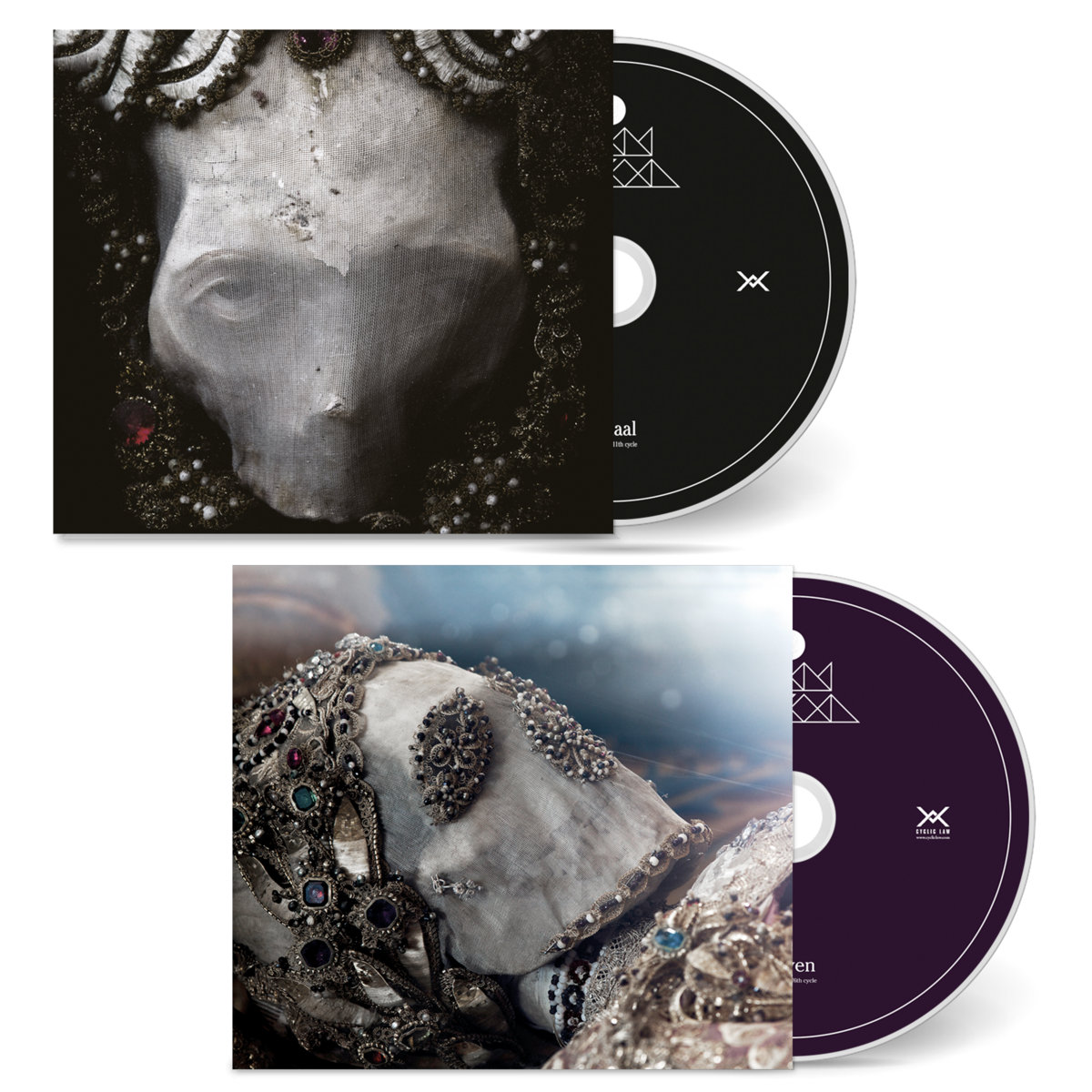 My micro obsession peaked after getting the only official write up on katakombenheiligen by Paul Koudounaris named Heavenly Bodies: Cult Treasures and Spectacular Saints from the Catacombs. An excellent exploration into the topic featuring almost all remaining relics of the time in amazing photo details with commentary and locations. Highly recommended, you won’t regret getting a copy for your coffee table! 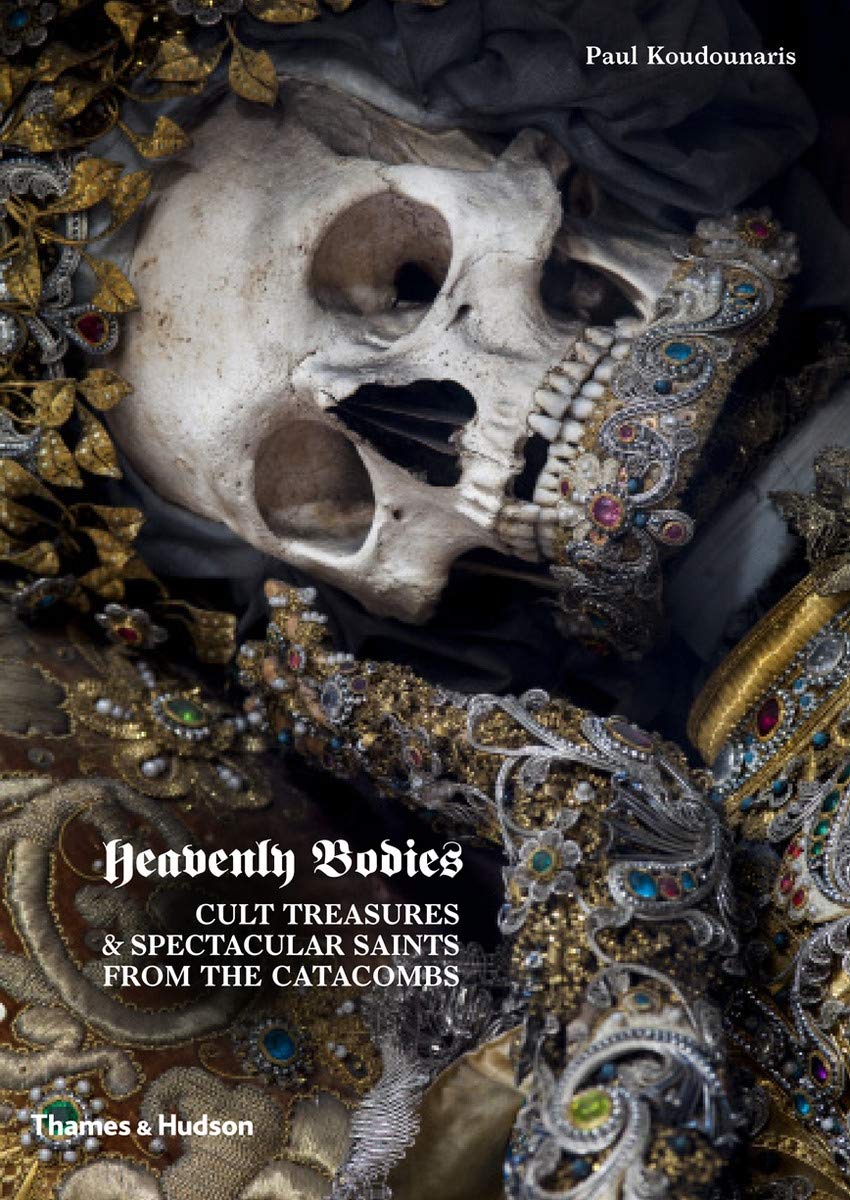 From what I’ve gather so far, some 450 years ago Catholicism was losing steam as the Protestant Revolution had taken a serious material and follower toll across what’s currently Germany, Austria and Switzerland. Around the same time, some random farmer had his donkey stuck in a hole near Italy’s endless vineyards. Uncovering the site revealed one of the oldest Christian catacombs from a thousand years ago, packed full of the skeletal remains of supposed early Christians. Supposed, as there is little factual proof all people buried there were Christians.

Anyway, then someone pulled the best marketing scheme of that time - dozens of holy skeletons were exhumed and sent all over Europe to be lavishly decorated and put on display as inspiration for the fading Catholic beliefs. 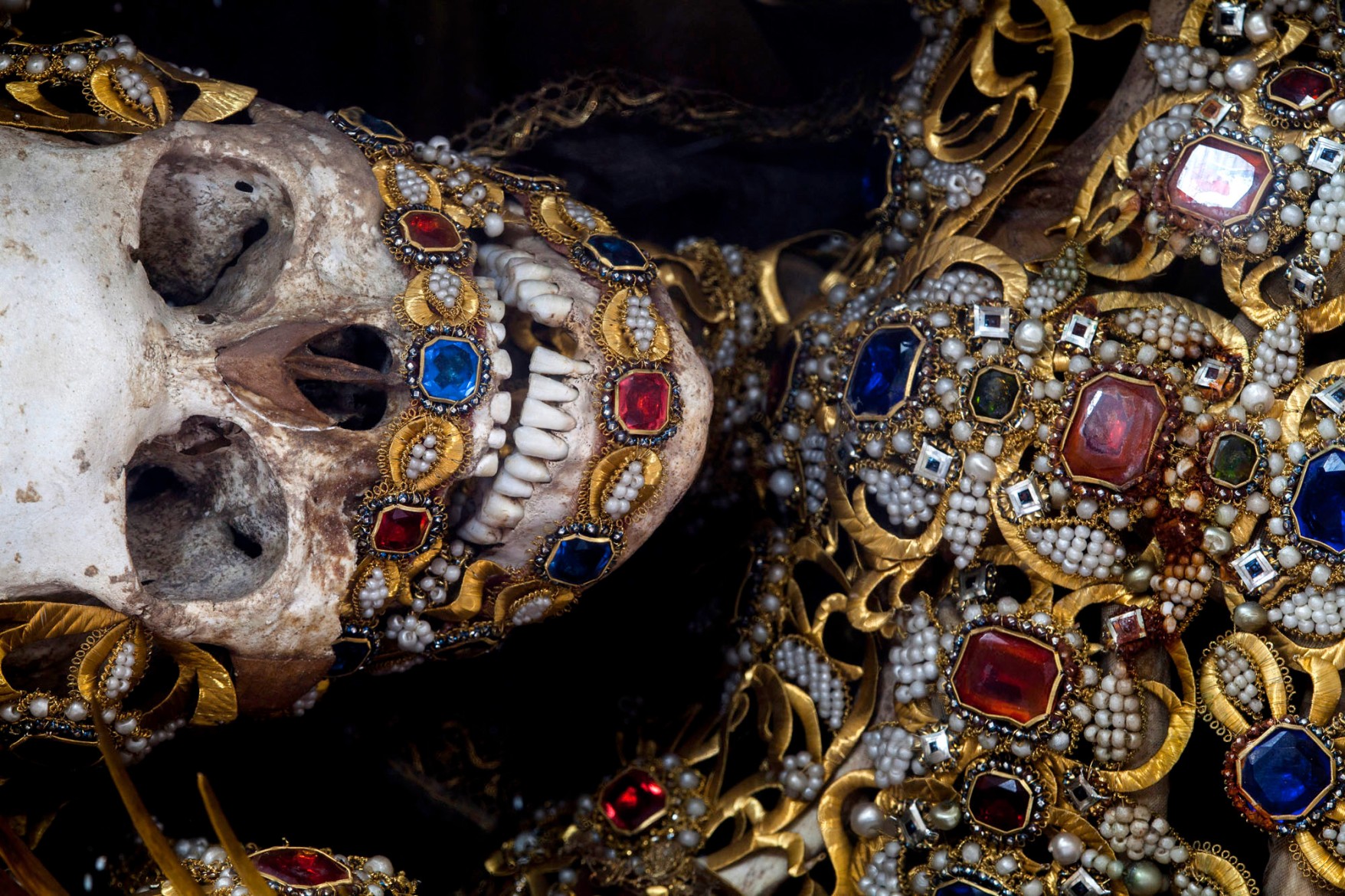 Catacomb saints were a smash hit, drawing in countless Catholics to pray for their health, faith, good fortune and overall state of their mortal lives. 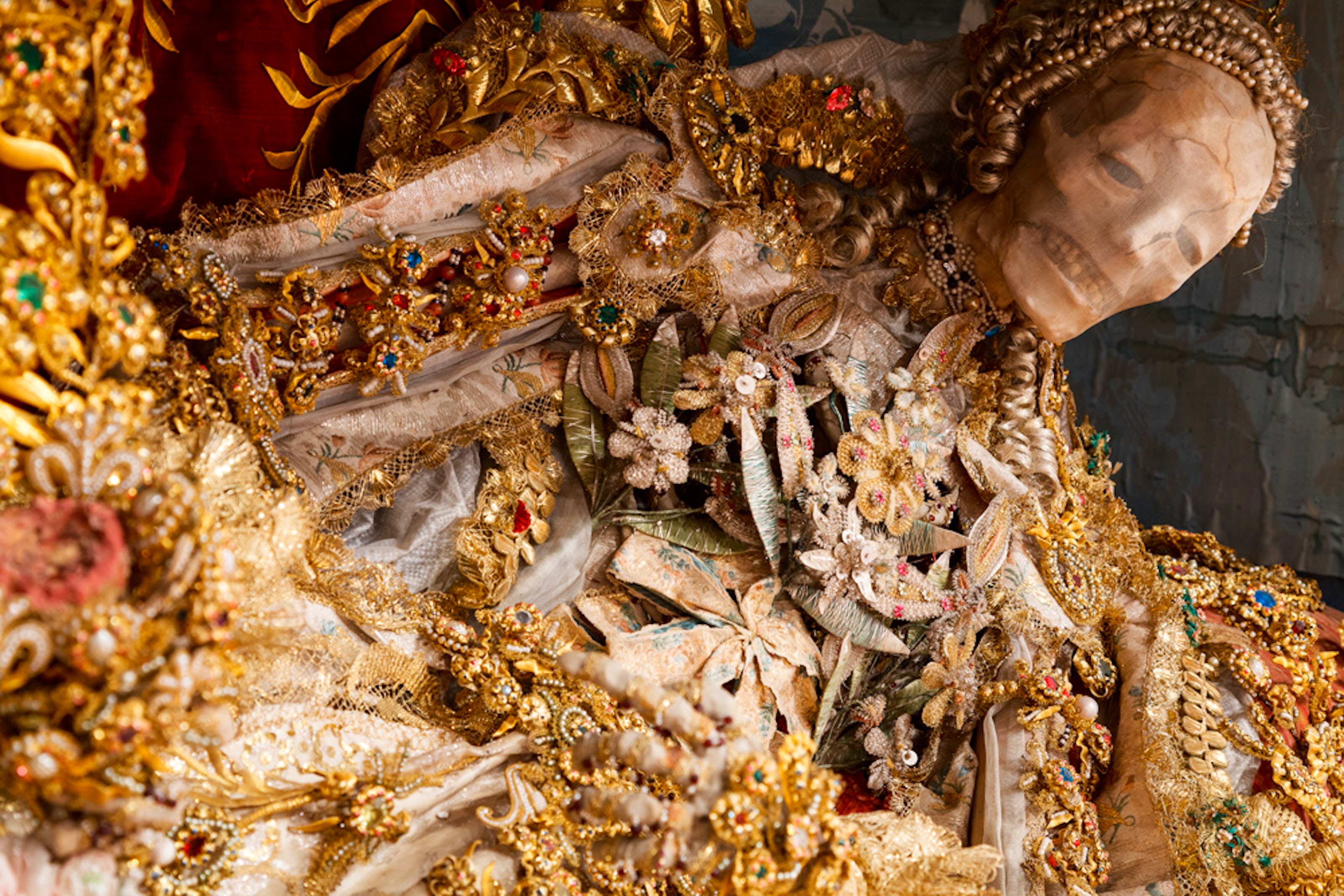 Contrary to popular belief, all of the gold, silver and precious gems were not meant to symbolize earthly goals, but the riches and prosperity that await true believers in the afterlife - friend, I’ll fetch you the Bible quote on this later. 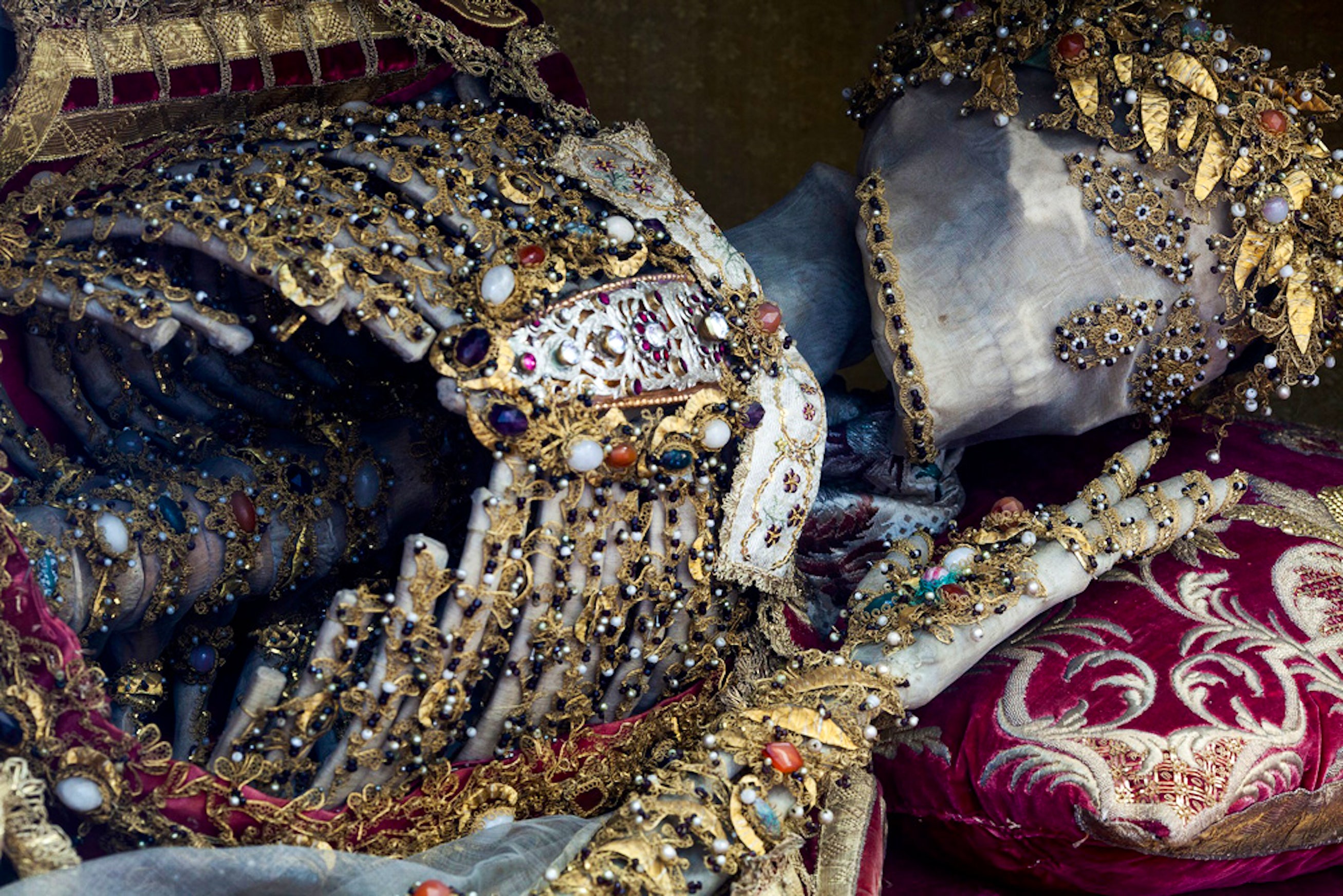 Nowadays, though, catacomb saints have long faded into obscurity and even my German friends had no idea about them. Although they’re still regarded as holy Christian relics, the amount of time (~2k hrs per saint) and exceptional craftsmanship are what drew me into seeing them in person this summer.

So, basically, catacomb saints are kinda like incorruptible saints, but with less skin and more bling.

The biggest collection of catacomb saints is located in Waldsassen, Germany. We drove in from Prague and were headed to Berlin, so getting there was very straightforward. For the record, relics are scattered all over Germany, Austria and Switzerland, though some of them are in small churches in the middle of nowhere, and reaching them with the overrated (Tesla) car would have been way too much of a challenge. We were on a very tight schedule and already lost an unplanned day in travel, so our bets were on Waldsassen abbey first with others on our way back home if time allows it. Spoiler - it didn’t.

Waldsassen is a bit unassuming - it’s traditionally Bavarian and does not offer much apart from the basilica and old library, so we drove there right away.

Built in the early 18th century, the interior is in typical high baroque style - everything is huge, opulent and awe inspiring. Intricate hand carved wood work line walls end to end, with life size statues of saints looming over it. Every inch of the ceiling was ornate and covered with frescos, the biggest of all right above the basilica entrance. 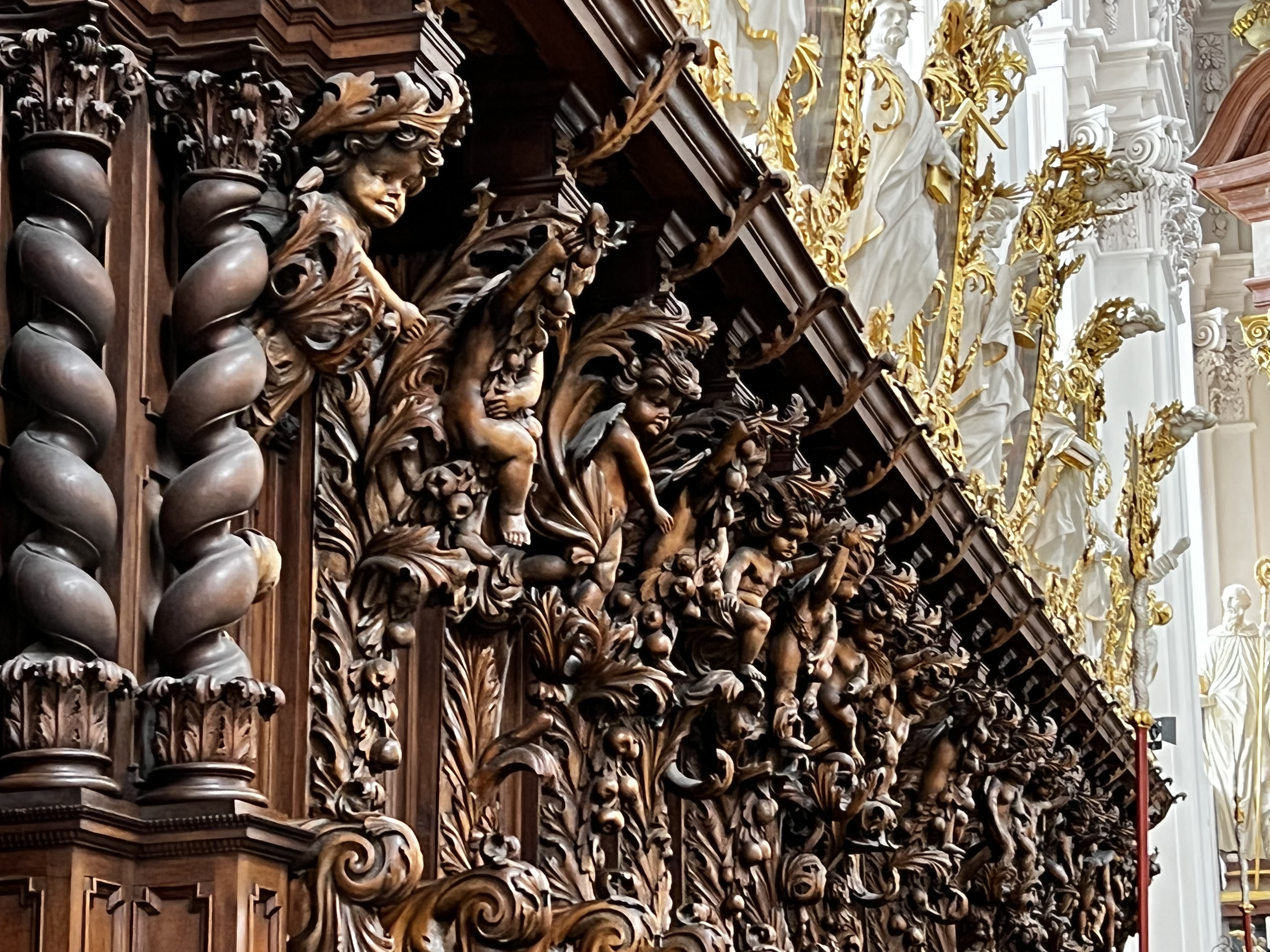 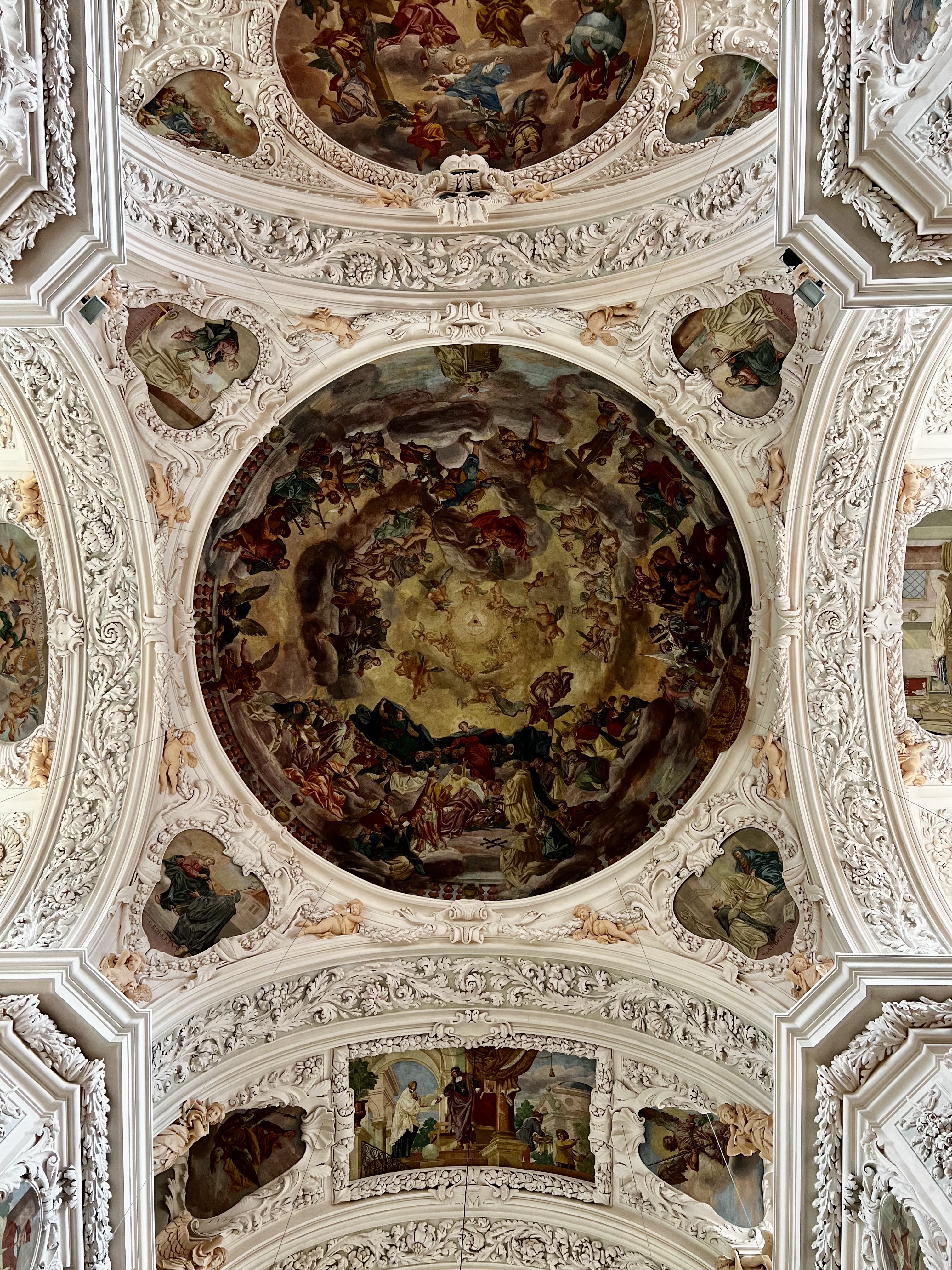 Apart from katakombenheiligen, Waldsassen Abbey houses one more relic - a very old statue of Jesus commonly called the savior without arms. It’s rather small and perched on top of a simple stand at around eye height. Both hands were broken by a soldier a long time ago, and many pilgrims see it as a sign of compassion and forgiveness. 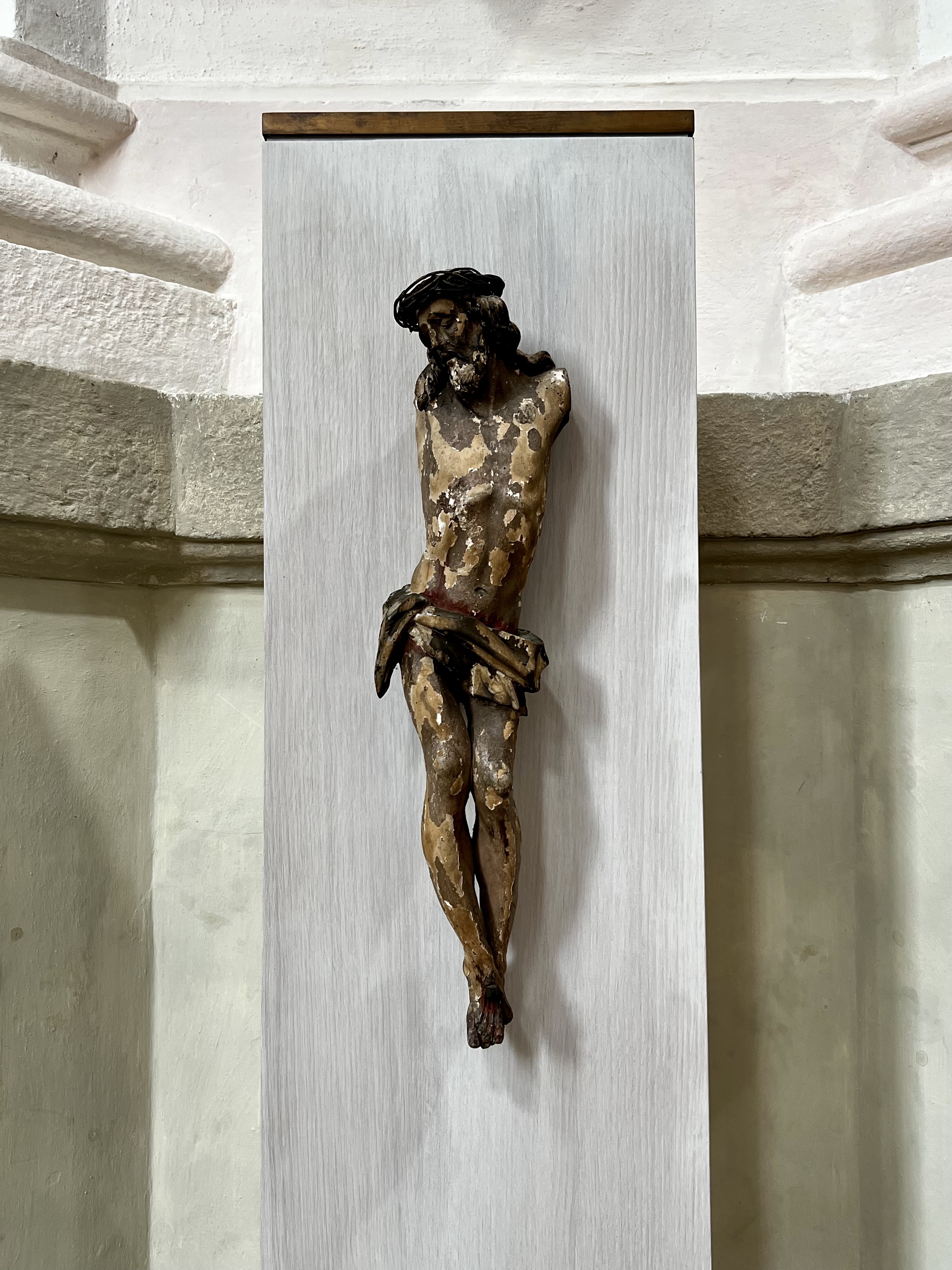 The titular skeletons are kept in gilded aquarium looking boxes that are embedded into each side wall, with a couple more in standing positions right above the main altar.

Friend, they had a common pattern for almost all relics - skeletons were assembled in reclining positions, dressed in high end gold and silver woven Roman style garments and often featured silk fabric around the bones and sometimes the entire head. The arrangement and amount of bling was based on church status, with this particular one having some of the most over the top decorations of all ~100ish remaining relics. Other common traits include vials of their own dehydrated blood - used as a symbol and proof of their martyrship, as well as assorted window dressing items such as books, laurel twigs and what not. One skeleton even has a sword, check this out! 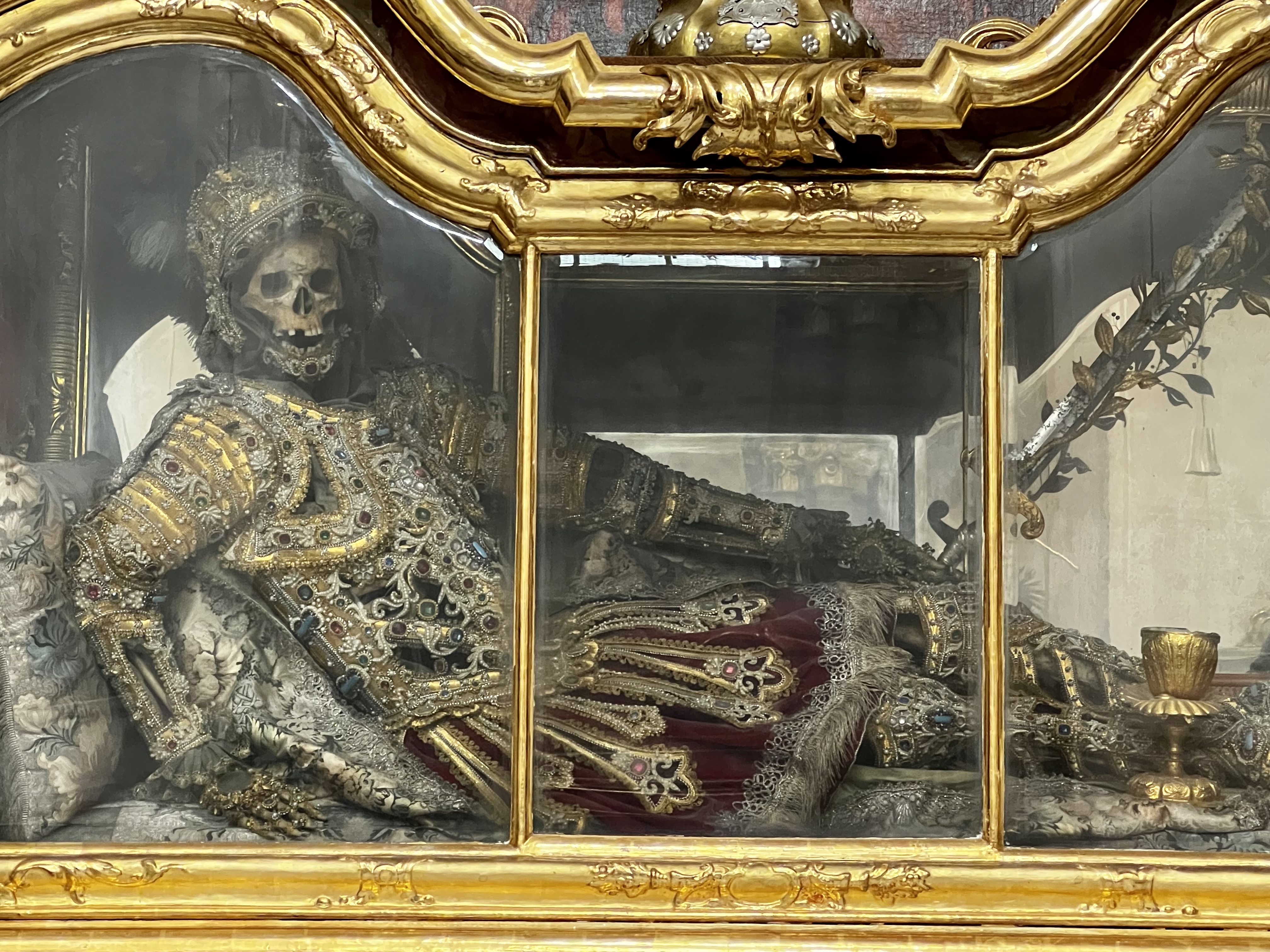 Sadly, we were not able to see the interior of the library during our visit, as it’s closed for visitors on Mondays and you guessed which day we ended up visiting Waldsassen. Regardless, it was built alongside the basilica, but finished much later. Currently maintained by nuns, just like the basilica, cloister and accompanying hotel/restaurant.

It features much the same level of lavishness and woodwork, but the theme is different. No Gucci skeletons this time, but rather ten life sized wooden statues representing people in professions related to books - book binders, butchers (leather was heavily used in the industry back then), and scribes - all hunched over by the laborious task that binds them together; pun intended again! 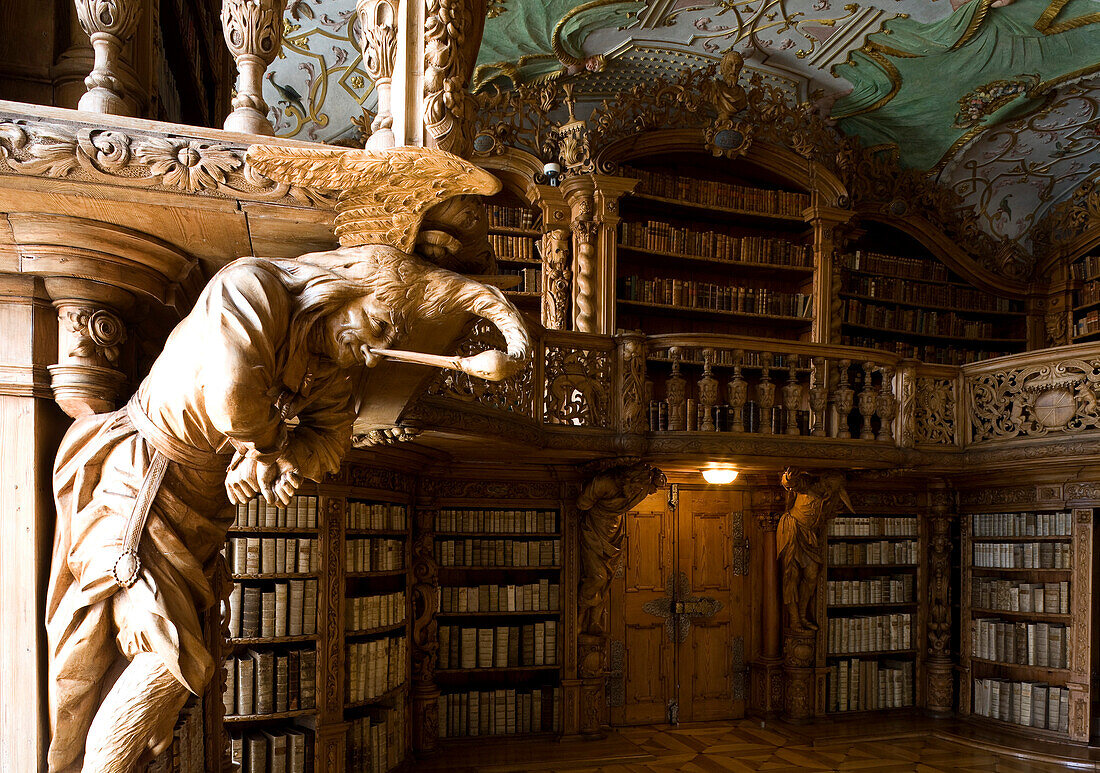 That’s mostly a wrap on the topic. Would love to go see some of the other remaining katakombenheiligen some day, but touring several would take a lot more planning and preparation. And less Tesla, ha!