I had the pleasure of contracting for a bunch of Americans not too long ago. We eventually parted ways, though my love and respect for one team in particular still remains.

So I decided to make them a farewell gift of sorts - it had to be Forecast themed, but also highly personalized. I’ve designed and printed stuff for the company before, and the response was highly positive. Come to think of it, 3D printing gifts is always a safe bet, but I wanted to take things a step further.

And since there are six people on this team, I decided to go for a collection. Designing a collection of things is much easier than I thought, and you also have the added benefit of exploring different ideas across however many pieces of the design you go for.

My starting point was an image someone made for a company blog post way back when:

There are quite a few things going on here, and this is what caught my eye at first glance:

All three are obviously done on purpose to give the illustration some charm and friendliness, so I wanted to carry these points over to my design in 3D.

I didn’t like the fistbump, though, so it didn’t make the cut. It wasn’t going to work for my project anyway, because I wanted each of the six models to look complete on its own, but also be part of the whole set when brought together.

So, what would be a different arm/hand pose and gesture that’s both familiar and friendly?

The wave. A science geek’s all time classic. (Let’s just make believe that Pluto is not on that plaque and Carl Sagan came up with a more equal way of portraying our species.)

In any case, fifteen minutes in Fusion 360 brought me this far. I made a couple of test prints to see which would be the best orientation for 3D printing, and also see if my initial model size was appropriate. Turned out I had to scale things down a bit.

Next was the theme

When thinking collections, one of the first things that comes to my mind are lucky surprise eggs. Whoever was leading the lucky surprise eggs division at Kinder back in the 90’s must have made truckloads of cash back then. Each and every surprise egg had a toy inside, and it belonged to a collection. The ones from my childhood were so amazingly done - both in design, as well as build quality. Here’s a reference image I dug up. And you know what - I still have all ten of these.

Lucky surprise eggs were the absolute shit when I was growing up. Nowadays, they’re just shit.

I hope team Forecast get the underlying collection thing going on, despite the fact that lucky surprise eggs are banned in the US for reasons mankind may never know.

So now I had a reference image and CAD model for it, a theme, but was lacking variety

The solution to this one is pretty simple - just think of the top key thing each of the team is best known for.

Most required very little pondering - one guy is a metalhead, another person on the team plays the guitar, someone likes biking, a girl is really into karaoke. A lad has one dog and occasionally babysits a bajillion more. One ex colleague in particular was really tricky, tho - he’s a bigger geek than me. Geek in pretty much every topic you throw at him. Well, he and his wife happen to expect a baby really soon, so that trumped everything else I had on my mind.

So I did some more 3D design to incorporate all of the ‘accessories’ for each figurine, and also do the unthinkable for me - model organics.

I’ve only used Fusion’s Sculpt mode once before, and didn’t like it all to be honest. Organic modeling is messy, annoying, and involves way too much trial and error to get right. Well, my second attemmpt wasn’t too horrible, mainly because I was going for a much more simple marshmallow/cartooney type of palms and fingers.

All of the smaller bits were printed on a DLP machine - the Anycubic Photon, . EDIT: It’s amazing and you can read more about it here!

I opted to use thick copper wires for the hands and legs, since it’s bendable, yet still thick enough to see clearly. I had some leftovers from rewiring my studio anyway, so thumbs up for upcycling.

Looping back to the funky whimsical aesthetic I was going for, parts of the paint job were left very sloppy on purpose. 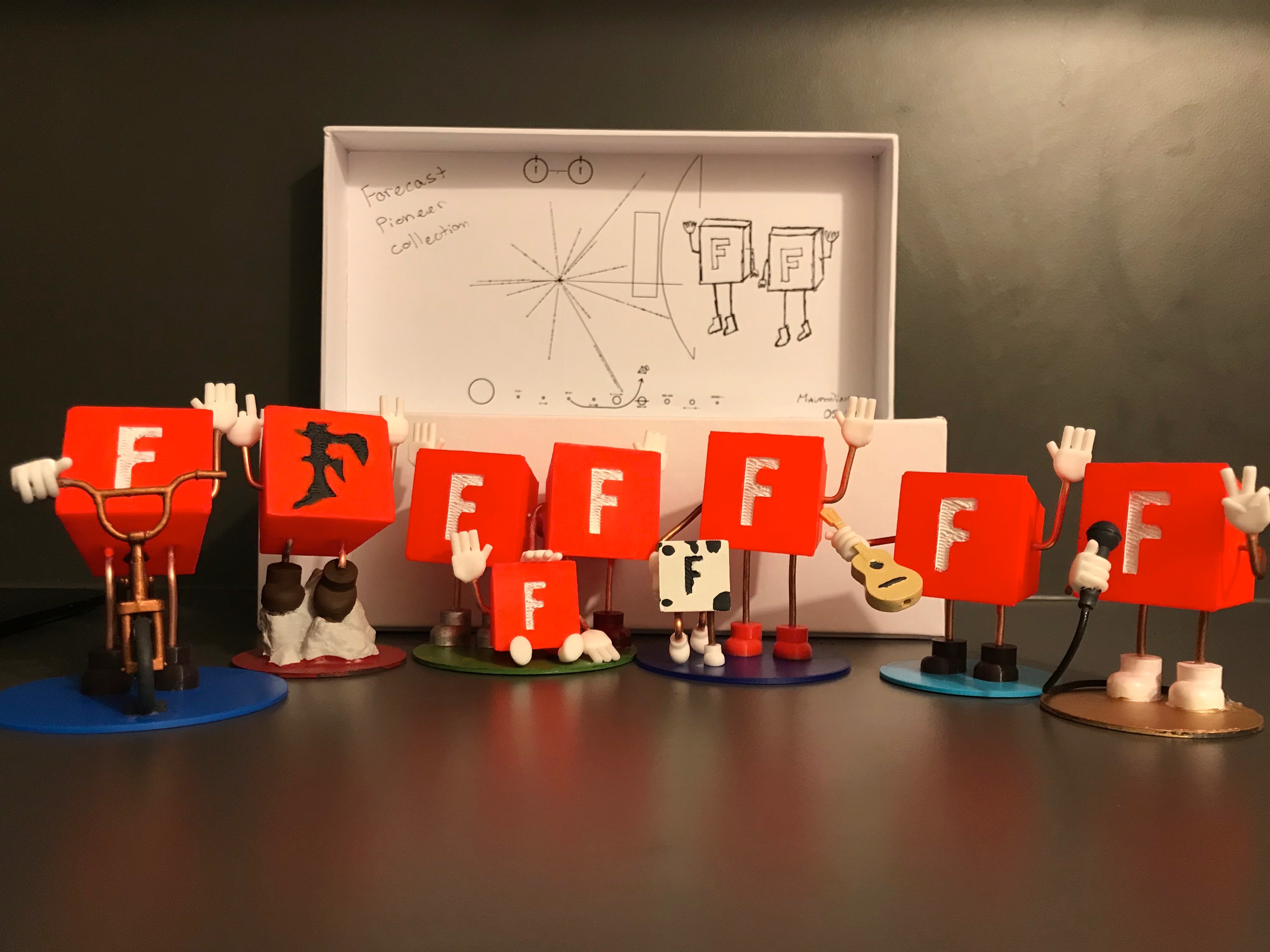 Forecast team, this one’s for you! XOXO