Lessons Learned from a Medical Project - a Nuanced Experience

It’s probably going to be a very long post and I’ll definitely need to split it into two parts. This one will focus on the non-technical side of things - what the business pitch was, how prototyping went and how the actual project came to an end.

The second part will be more CAD oriented and I’ll go over the design process for both prototypes I worked on - what went well and what needed rework. That sort of thing.

I also did some extra research on a handful of exotic filaments for 3D printing, so I’ll make sure to drop some wisdom on that end as well.

Following the departure from my previous client, I decided to take it easy for a while and hold off another full time contract gig for a while. This way, I’d also have extra time to work on a few personal projects in between the things I’d already scheduled.

Speaking of schedules, my last few months have been all over the place - I championed several conferences around Europe, an extra long stay at a friend’s boat house in Amsterdam (with a side of heavy duty front yard deck reconstruction), my first Maker Faire in Berlin where I met Jo Prusa, a wedding trip to south Spain followed by a short visit to Malta.

My travel extravaganza came to an end in mid August, so it was time to work my way through the side projects I had on deck. This post will cover one of the major ones - a medical collaboration for leg prosthetics.

It all started end of last year when I did a talk on CAD and 3D printing at Puzl.

Quite a few people showed up - some of them were engineers who were interested in incorporating FDM into their workflow. Others were hobbyists just like me, and some had no prior experience or knowledge about additive manufacturing altogether.

Anyway, I ended with a handful of leads over the following week, and this is the story of one of them.

The business pitch in one line

With the help of a few mutual friends, a guy reached out and wanted some help with a project he’s had on his mind. The idea is fairly simple - model, design, and 3D print covers for prosthetic legs.

That certainly wasn’t something new or groundbreaking for me - a number of companies have been doing this for a number of years, including a local one which has silently flopped as far as I know.

Well, the guy seemed pretty pumped up about the project, and although I said I’d most probably not be in it for the long run, agreed to work on a prototype and see how far that gets us.

After all, this isn’t my first time doing something related to prosthetics - I’m involved in e-NABLE and have been closely following the story of Open Bionics.

Come to think of it, 3D printing is the perfect candidate for experimentation in this field. Since prosthetic limbs are all custom made, anything that has to do with them needs a dedicated and unique design.

Something that wasn’t even remotely possible a decade ago.

We met a total of four times - the first one was basically a meet and greet and we didn’t get anything done.

Our next two meetings were far more productive - I took measures, had the 3D model mostly done and did a test print to see if it fits. A few areas needed touch ups, so I fixed them, did another test print and we met one final time to wrap things up.

Over the course of our meetings, I started noticing that there was more to our little project than just a prototype. He wanted to turn it into a business. Fast.

Where the supposed plan fell short

I kinda had a feeling that the trajectory of this collaboration, overall, wasn’t very good. Things seemed very one sided and that’s never a good sign.

In general, when it comes to forming a new business, one’s knowledge and abilities should fall into one of three categories - business, technology, or sales.

You either understand the field you want to succeed in, have the necessary tools and/or knowledge to do so, or know how to disrupt the current market.

That being said, I wore the technology hat. My task was to understand how to properly measure a patient’s prosthesis, figure out the best way to model the cover for it, how both pieces of the cover should fit together, and what would be the best material to use.

That’s all good and well, but I don’t think he wore any of the other two. Bummer.

If someone asks you to work on a project and you’re needed for the technology side of things, the general assumption would be that the business side of things has already been taken care of, or at least brainstormed to some workable direction.

Sadly, this wasn’t the case here.

Apart from a few concepts and good suggestions, nothing was thought of business wise.

A big turn off for me was that we spent close to 10 hours discussing solutions for both software and hardware - how 3D printers work, what are the material options we can use, and whether trying to push this idea to a small scale business would be feasible. We covered (more like I explained) A LOT over our four meetings. Everything was brand new information for my supposed business partner. Sadly, I never saw him take notes, and this made me think that he has no interest in understanding how everything fits together. Instead, he needed someone to just do the job for him. Strike one.

Strike two followed shortly after, and had to do with the lack of focus on one specific product only. Trying to get a business going means you need to concentrate on one single product and ensure that it’s given enough thought and attention before attracting clients. However, he constantly kept asking me about a few other ideas he had, and whether designing/printing them would also be possible alongside the covers I was already working on.

The third strike and my resignation from the project had to do with how he thought our prosthetic covers could sell well on the market - just aim to sell them cheaper than the competition.

Turned out that his idea was to start producing prosthetic covers as soon as possible and his business plan was to basically sell them at a lower price than what’s available on the market. Actually, he was referring to one product in particular.

And there are two very big problems with this:

When pricing products, it is critical to take into account how yours is being made and actually understand the whole manufacturing process behind it.

The ‘competitor’ covers he was referring to are not printed and are also not custom made. I only saw a few pictures of them, but it seemed like they were made out of a thermoplastic of some sort that has been vacuum formed with very little post processing.

So, for that sort of item to be mass produced, you basically need to do the following once:

However, the route we were going through wasn’t that easy and it looked more like this:

A rough estimate of the above would amount to something between 30 and 40 hours. Hours of my time, that is, since I was wearing the technology hat, and this is where most of the work had to be done. The design would take several, printing can take up to 30 depending on size and filament, and post processing would take a few more.

Not to mention the possibility of something going wrong during any of the steps above. This would require starting all over again. A statistic from 2016 states that 3D printing has an average success rate of 70-90% depending on machine type and complexity of models.

Also, a small business can’t afford to work with little profit margin unless investments are involved, which they weren’t in this particular case. This would leave you with no wiggle room to experiment with new products, manufacturing processes, or materials. No bueno.

So, long story short - although it’s technically possible to produce custom made 3D printed prosthetic covers using conventional technologies, the time and effort put into the process won’t justify the end result and its cost on a low end commercial level.

It seems this is fairly common conclusion among enthusiasts who have already attempted something along those lines - I found a bunch of open sourced models and designs while doing research. None of them have evolved to a working business state, tho.

Regardless of that, I had a lot more takings than expected for this project, and to me they exceeded the amount of time I put in it.

Tune in next time for part 2 where I’ll tell you all about the design process and how printing turned out. Until then, here are a few renders of the final result: 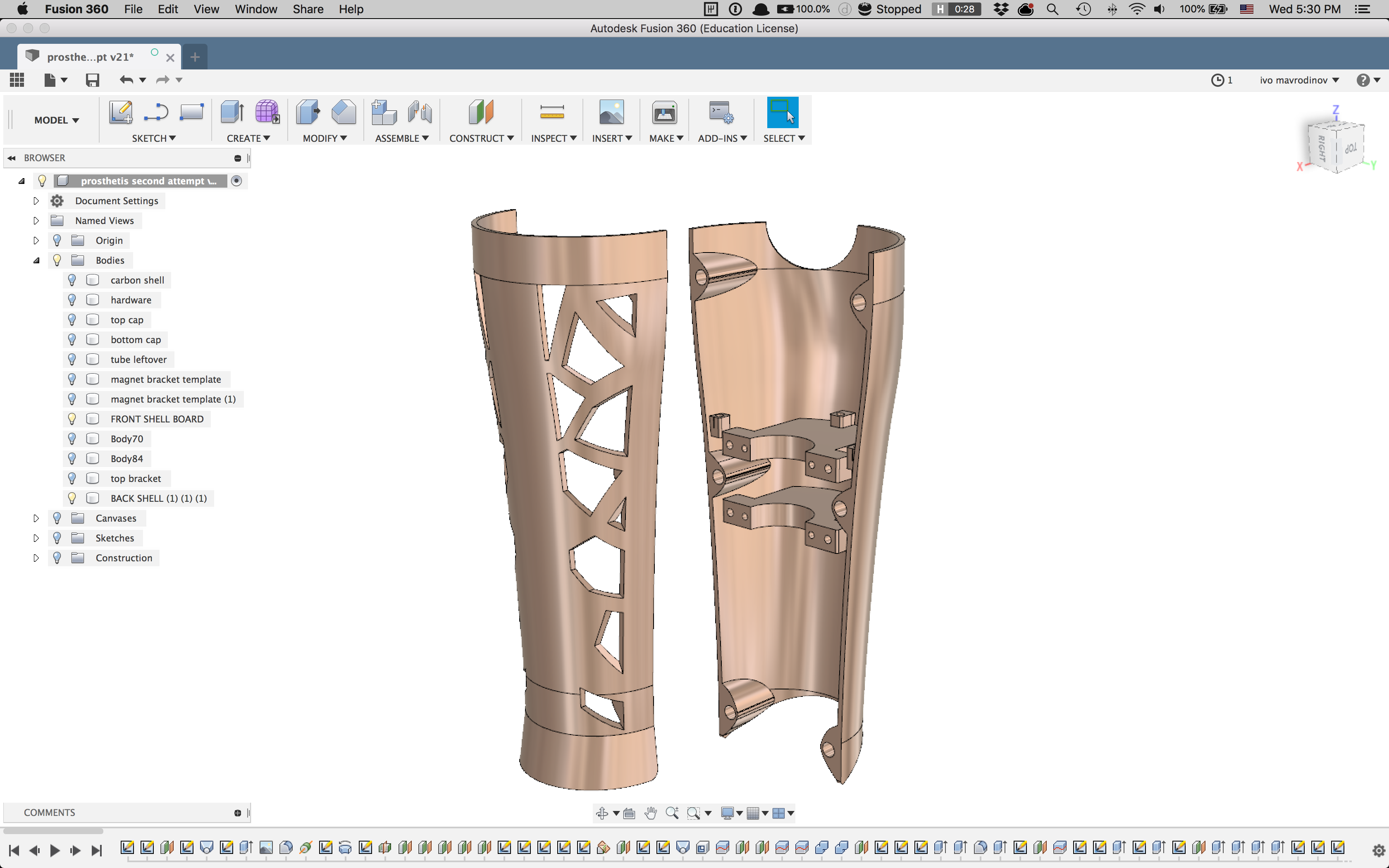 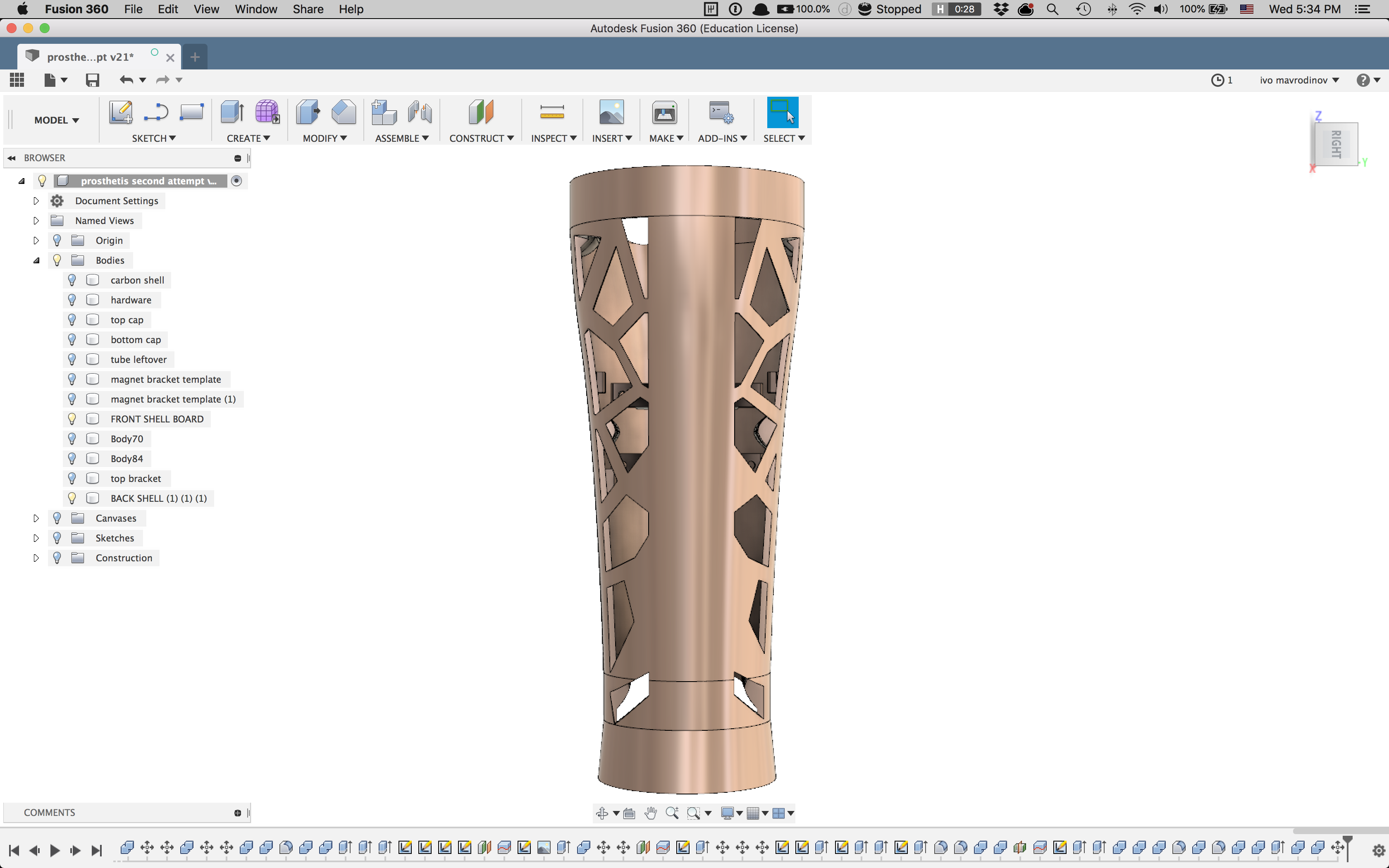 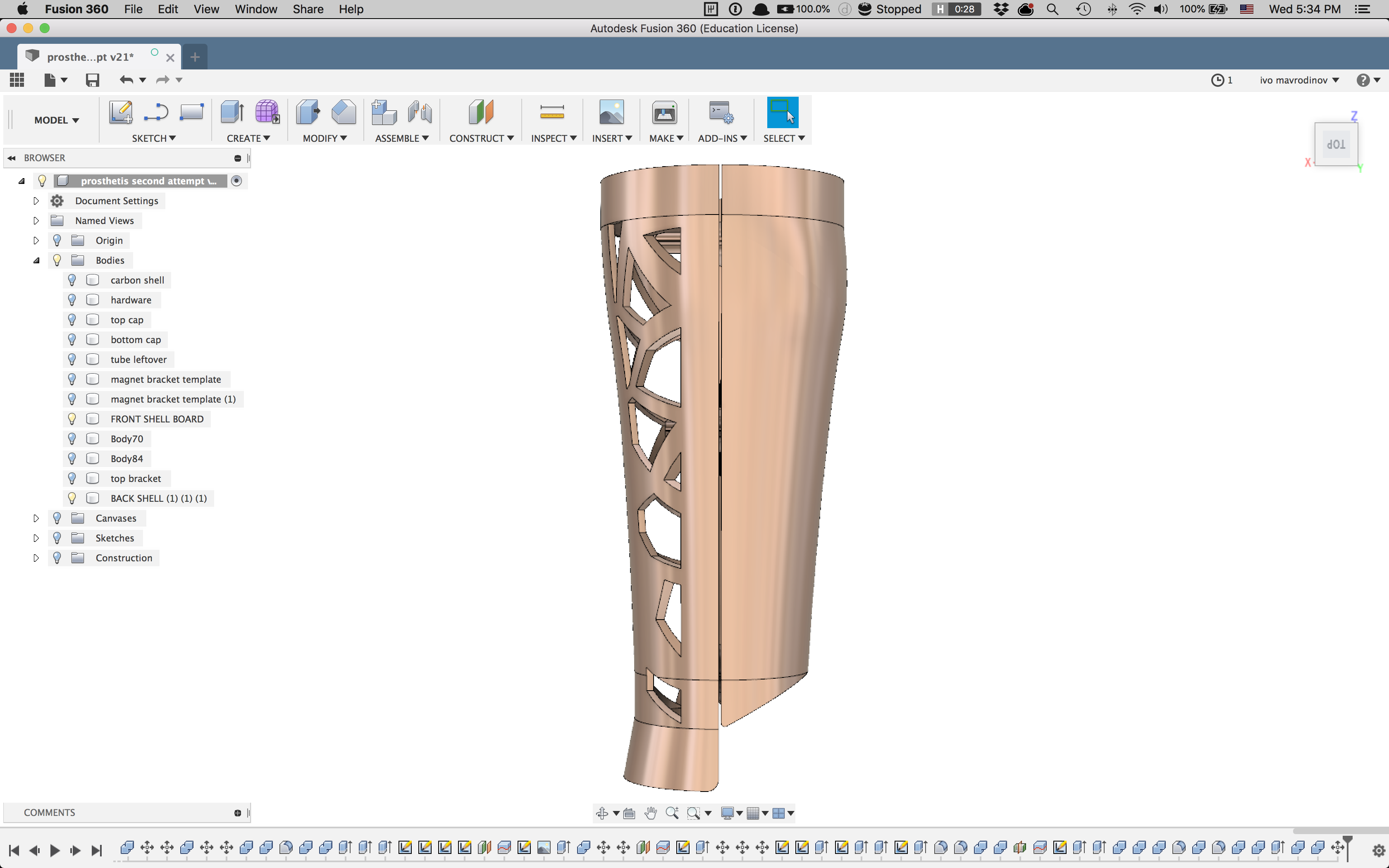