I had the pleasure of attending Additive Days 2020 last week, and wanted to share a few details about the conference while it’s still fresh in my mind.

That’s a three day event bringing together professionals of different business fields who all share the common interest of incorporating 3D printing technologies in one way or another.

Kudos to team B2N, the main organizer of the event - that’s the biggest and most influential additive manufacturing company in my part of the world, and they’re also distributors of some of the big name manufacturers like Ultimaker, Formlabs, and Raise 3D.

Sadly, missing the event newsletter meant I was only able to fit the first conference day into my schedule.

Be that as it may, here are some thoughts and impressions of the first day: talks, exhibition area, vendors, new friends, old friends - all that jazz.

The exhibition room was fairly small, but well packed with several collections and a few standalone pieces. It was situated right next to the conference area, so I was able to visit a few times in between talks.

A Dark Tour of the Universe

The collection offers an interesting tactile and auditory journey that can also be experienced by people who are visually impaired.

Here are a couple of the displayed models. They were fairly small, so to get a high enough print resolution, they were probably printed in SLS. 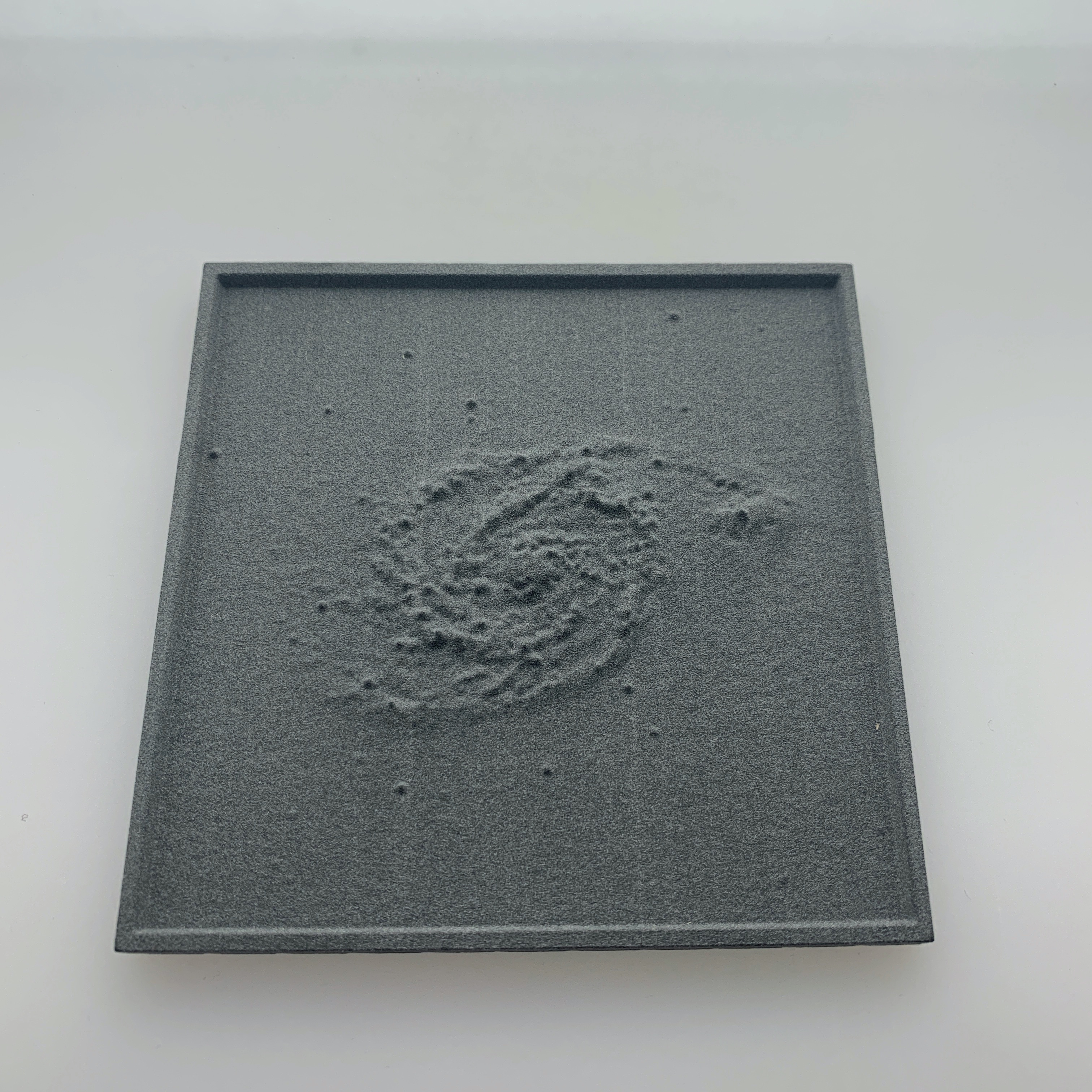 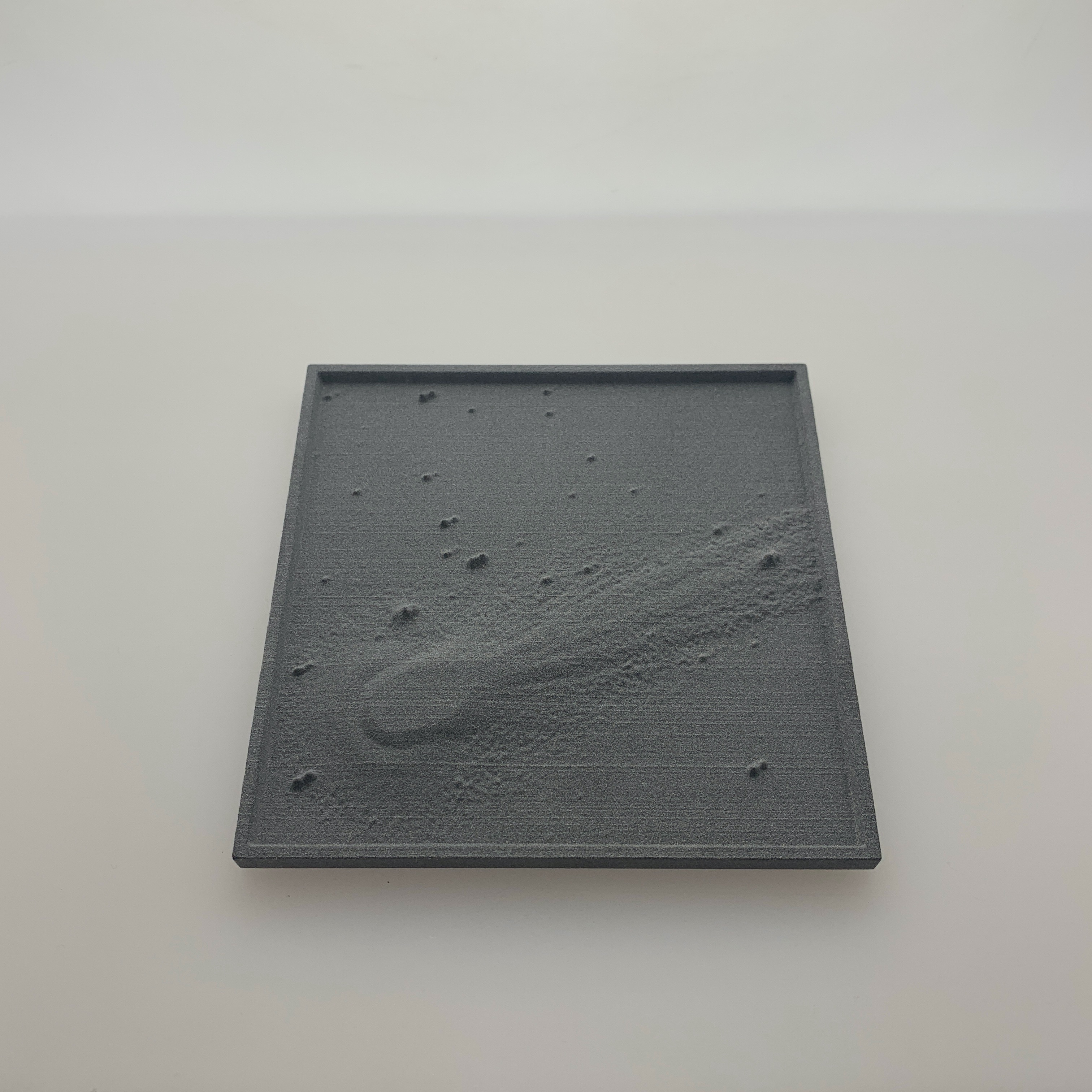 Further information about the project can be found here.

UK based Blast Studio brought their Kickstarter baby, and it basically looks like this: 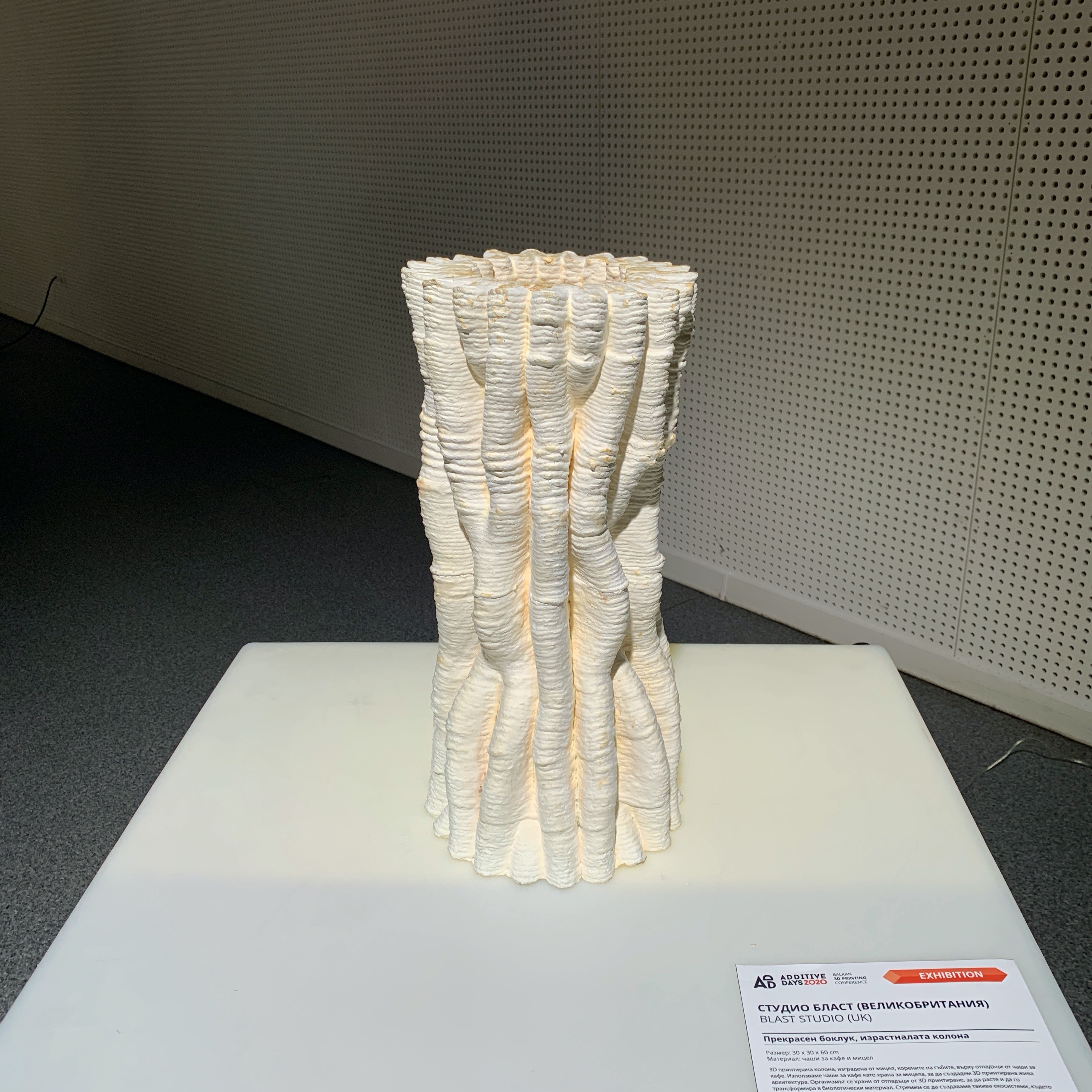 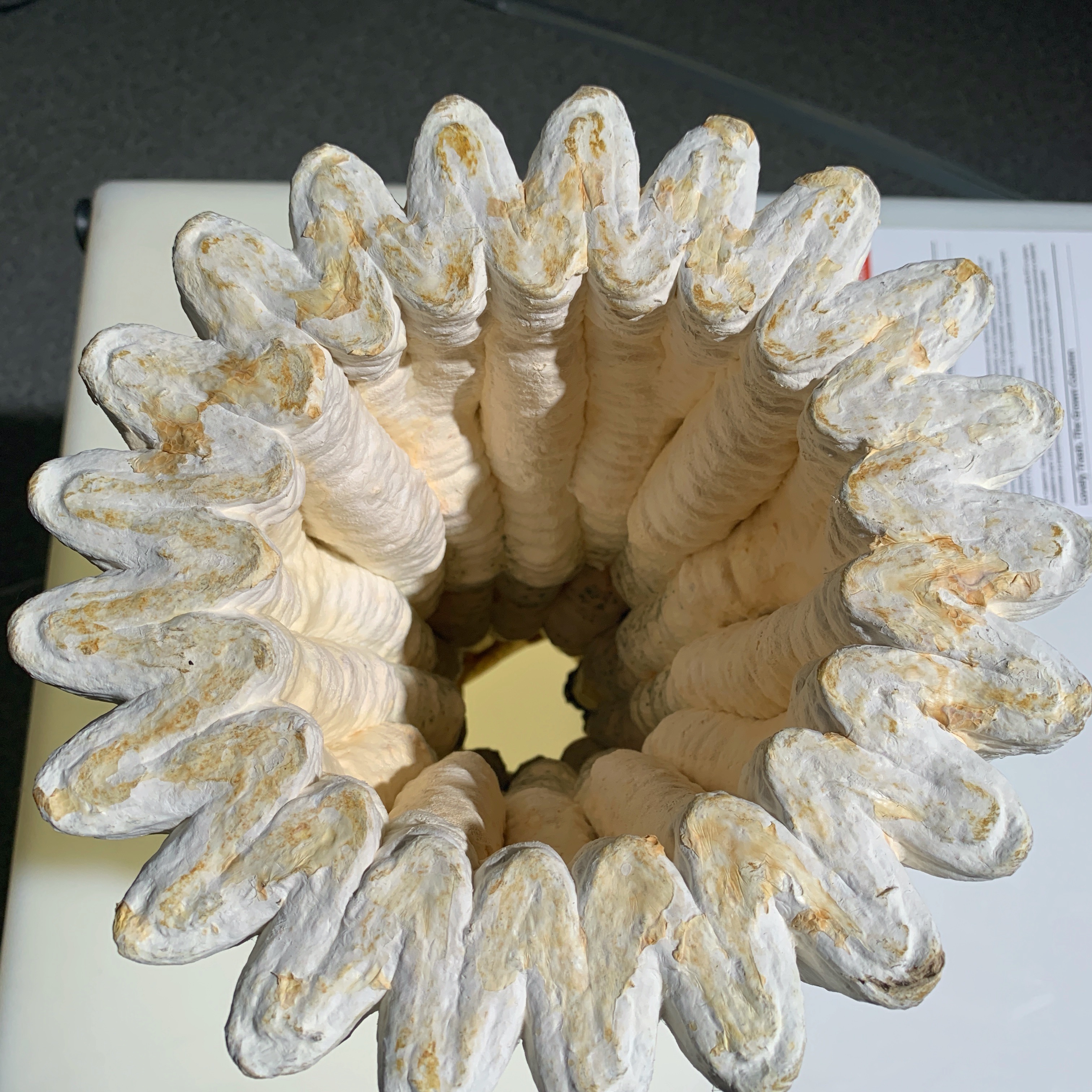 An interesting sustainability project that incorporates 3D printing, upcycling, and mycelia. In short, the team sourced used coffee cups from local cafes, turned them to pulp, and extruded them using syringe based printers (the same type of machine used for ceramics). Models were then introduced to a mycelium rich environment and finally baked after the fungus was well established within the model.

The vase looked quirky, smelled funky, and was surprisingly durable!

More about Blast Studio and their bio design furniture here.

BigRep had quite the first day presence with several exhibitions, a conference talk, and the largest vendor booth (more on that later).

This piece was part aesthetic and part functional, but more importantly - huge. 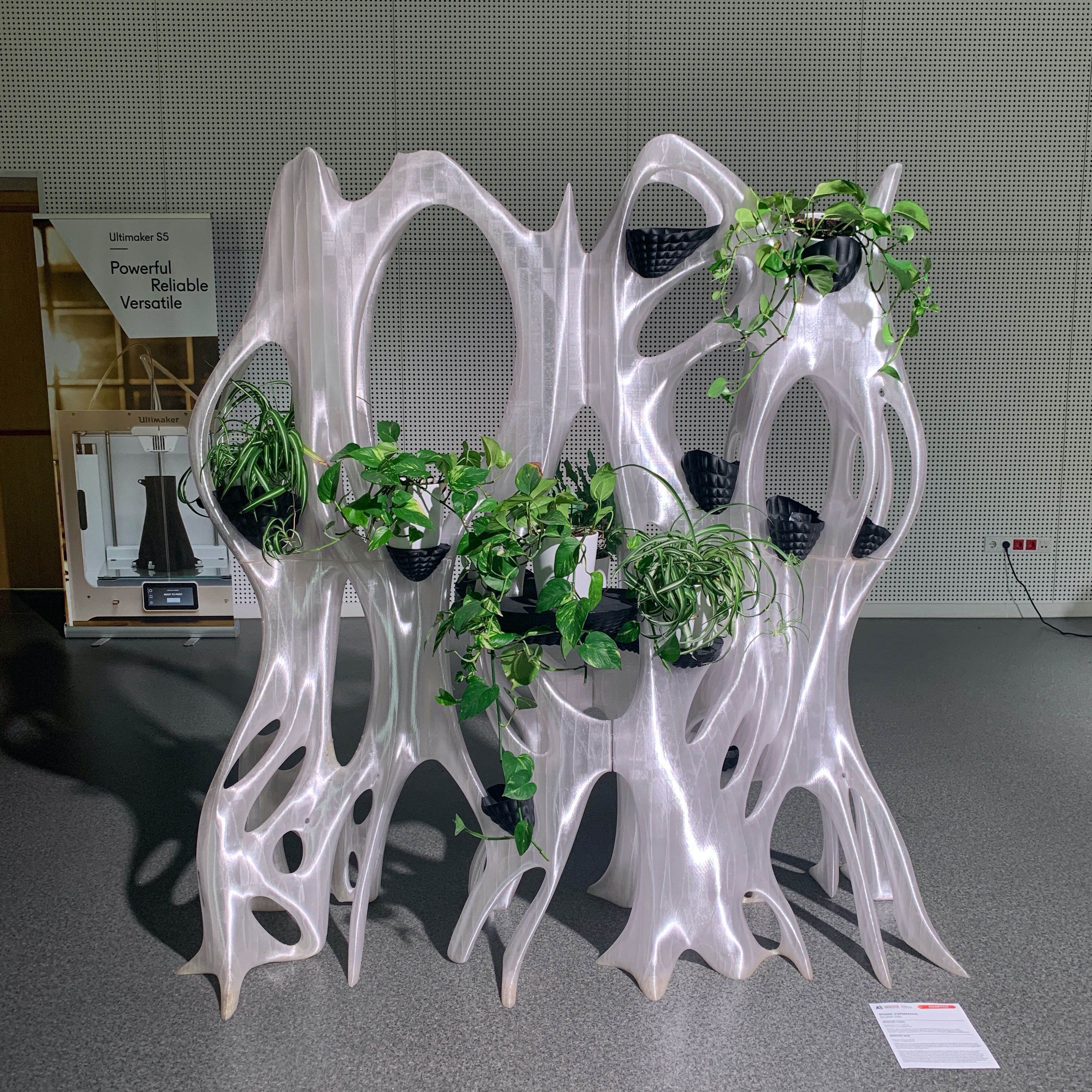 The wall was around 3x2 meters and consisted of modular interlocking pieces printed out of recycled PET. The whole assembly had an internal system of sprinklers, allowing rain water to reach each of the plants. This type of shape suggests generative design for the exterior, but the water feature and modular connectors were probably added separately.

This post goes into more details about the eco wall.

Honestly, I’m not really fond of this model - it kinda looks like the lead designer of Fisher Price was given a project to reimagine the Batmobile and this is what came out of the hackathon. 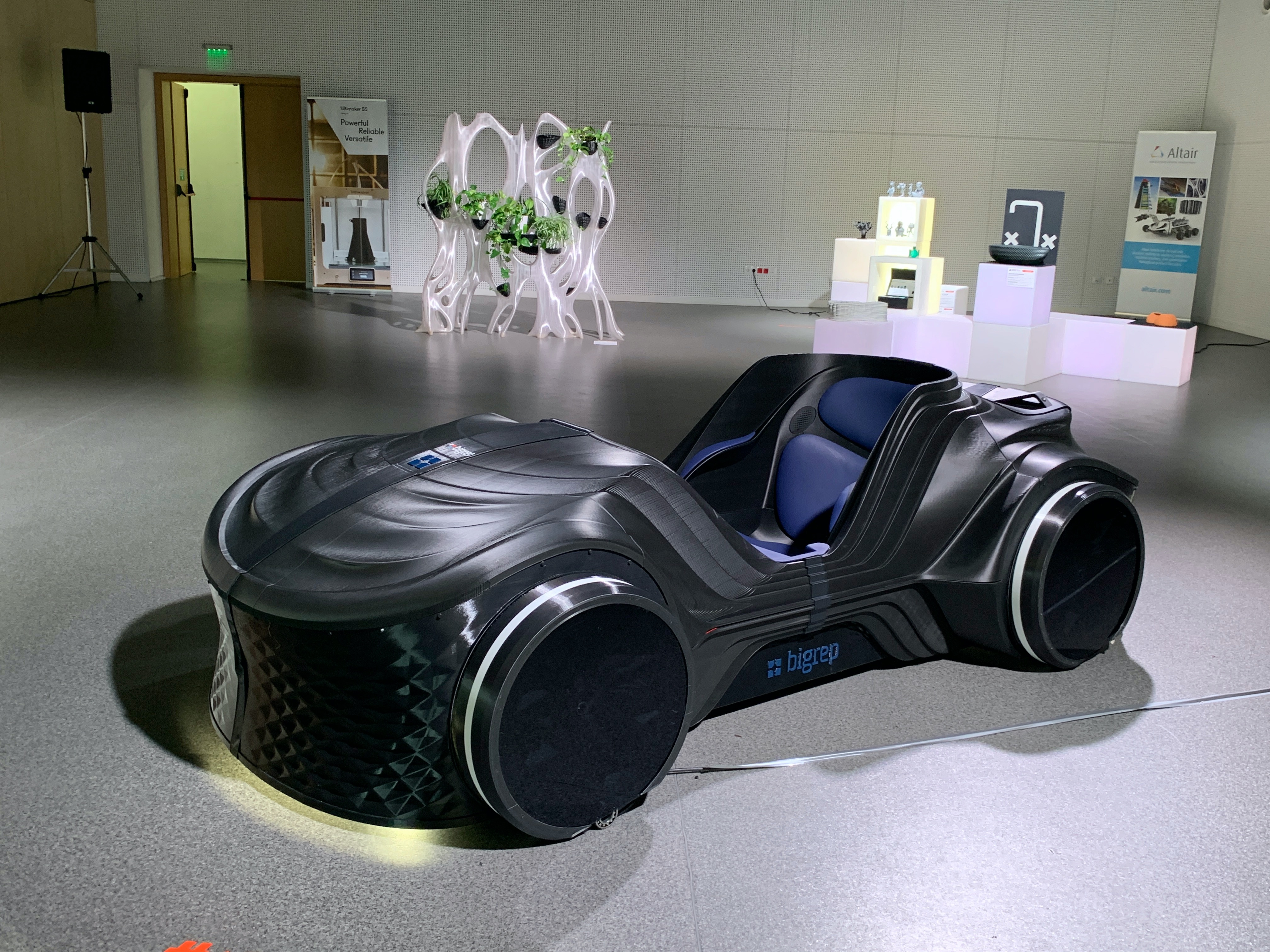 The car is fully 3D printed, though not functional in its current iteration. BigRep’s concept behind this project is to push the boundaries of additive manufacturing to brainstorm and experiment with the idea of small modular cars.

In a nutshell, modular cars can provide a last mile transportation based on your personal needs. Traveling alone from the airport with a big suitcase - get a single seat ride with a spacious trunk. Need to drive the kids to school - swap the trunk for extra seats.

Pretty cool concept, but it’s basically just that for now - a concept. The team behind it has big ideas, though, so I wouldn’t be surprised to see them partner with an actual automotive company to make a functioning car.

What excited me the most for this project is that it was completed in less than two months!

More information about the company and their innovative building project here. 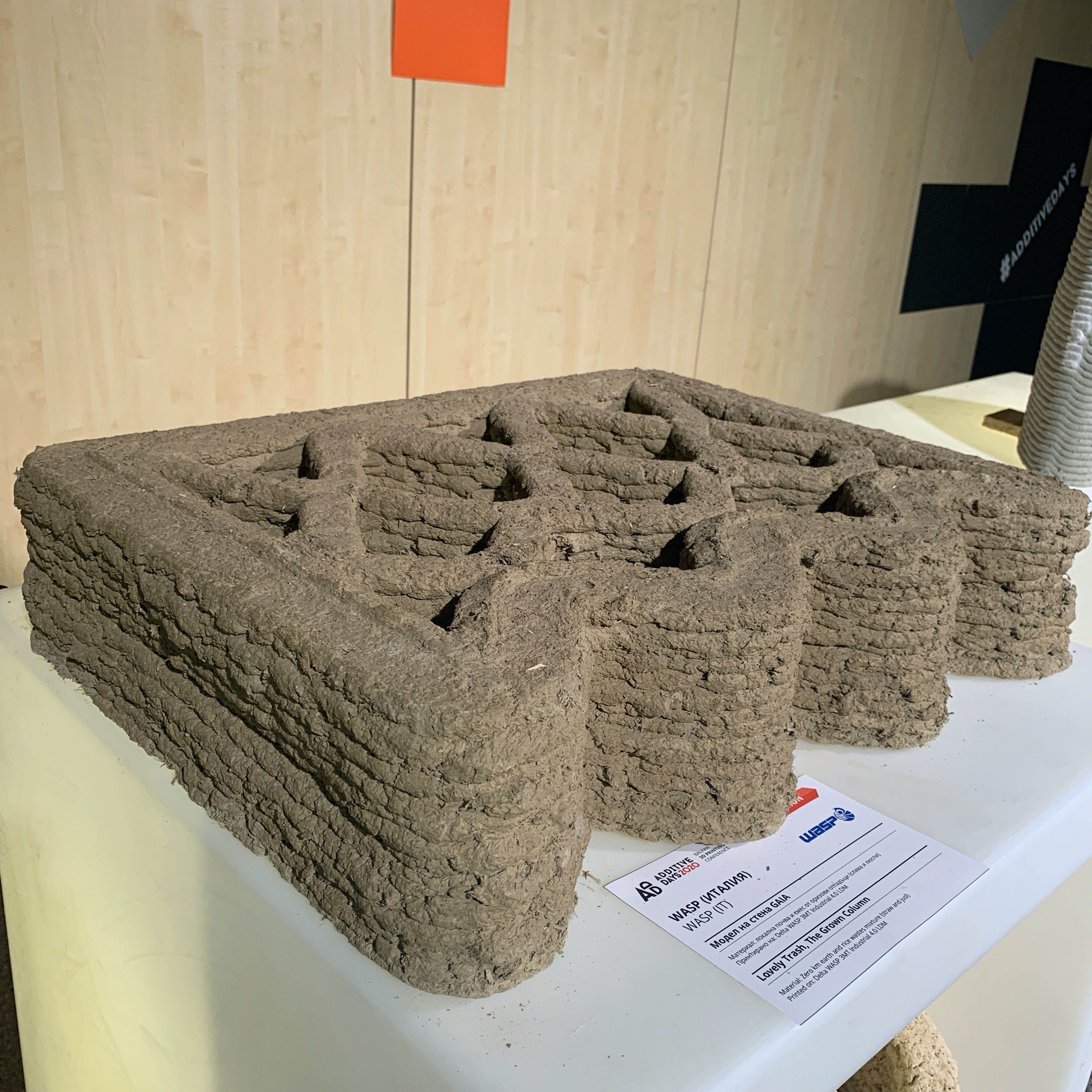 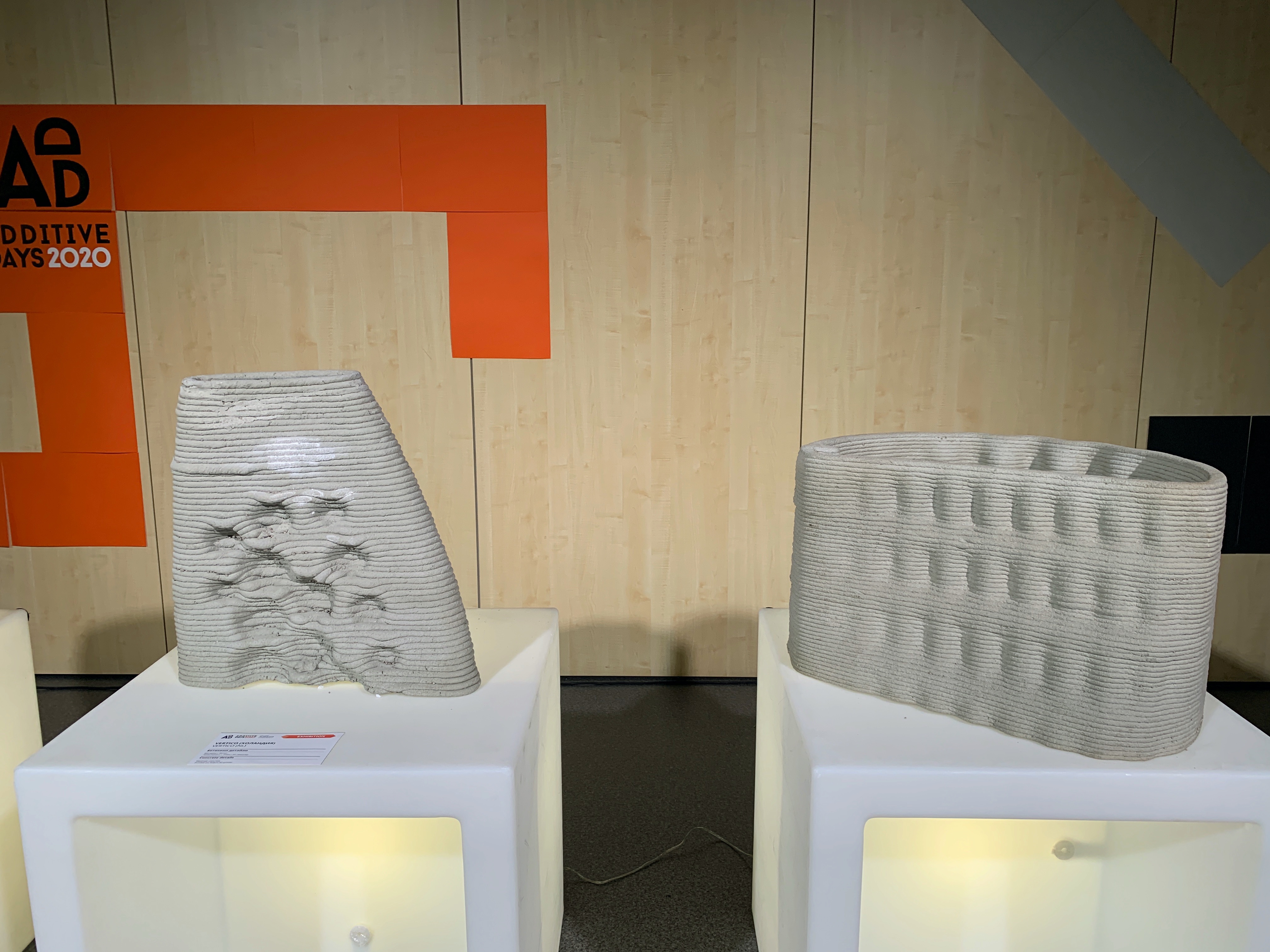 The new multi-everything machine from Stratasys

I almost missed this dinky model of what appeared to be a perfume bottle made on the new multi-material, multi-color, and multi-secretive high end industrial printer that Stratasys boringly named J850. 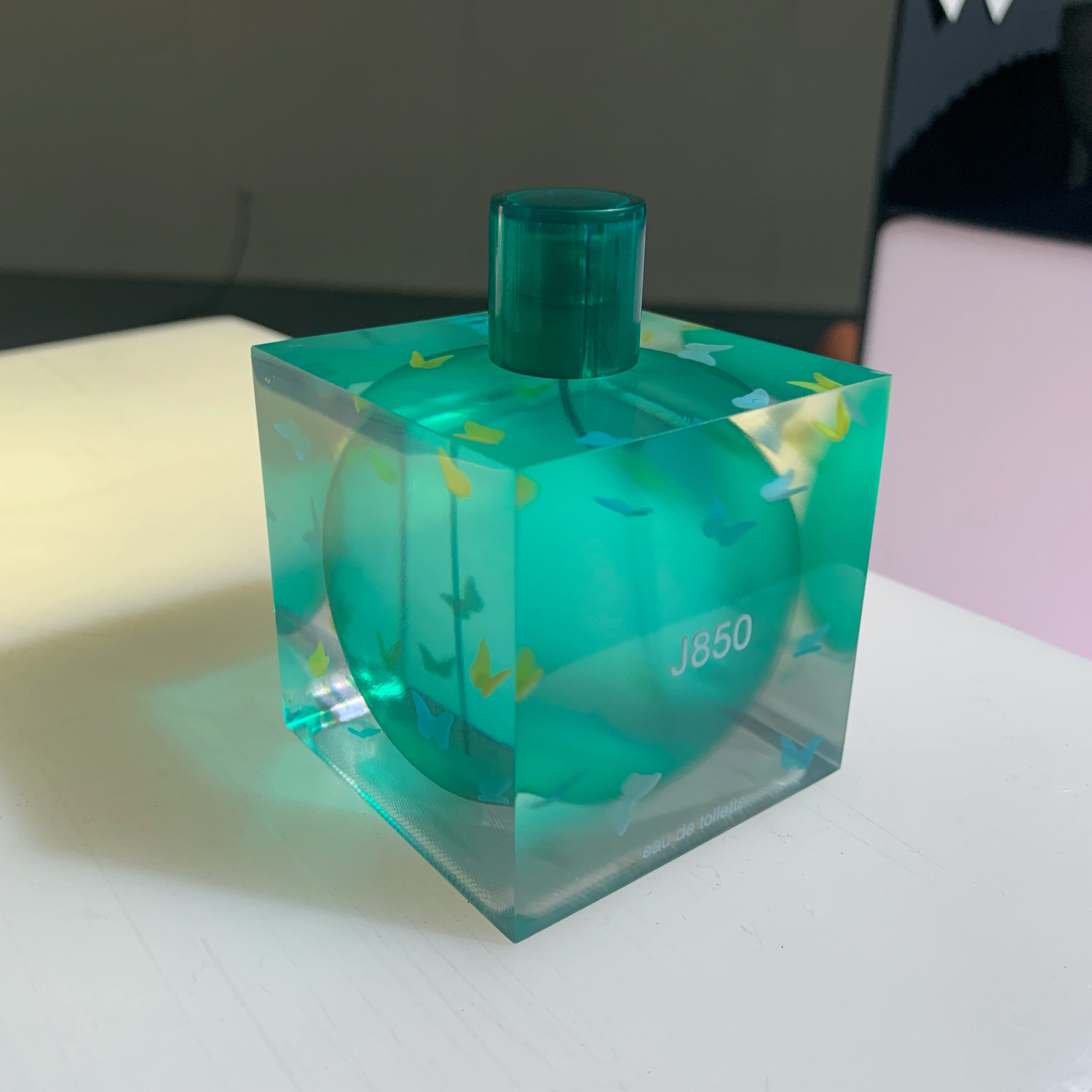 The technology behind it is not well known, but the model felt smooth to the touch, perfectly transparent, and had full color details on the inside.

I’ll give them credit for figuring out a way to eliminate refraction from additive manufacturing, because that’s basically impossible for FFF and very hard to achieve for DLP/SLA printers.

Looks cute and all, but that’s about it.

Conference area - one track, back to back

I’m a really big fan of single track conferences - you’re given the option to attend all talks without having to pick and choose the top ones.

That being said, the only negative about Additive Days was that all talks were back to back with no breaks in between, with just one lunch break forced in the middle. 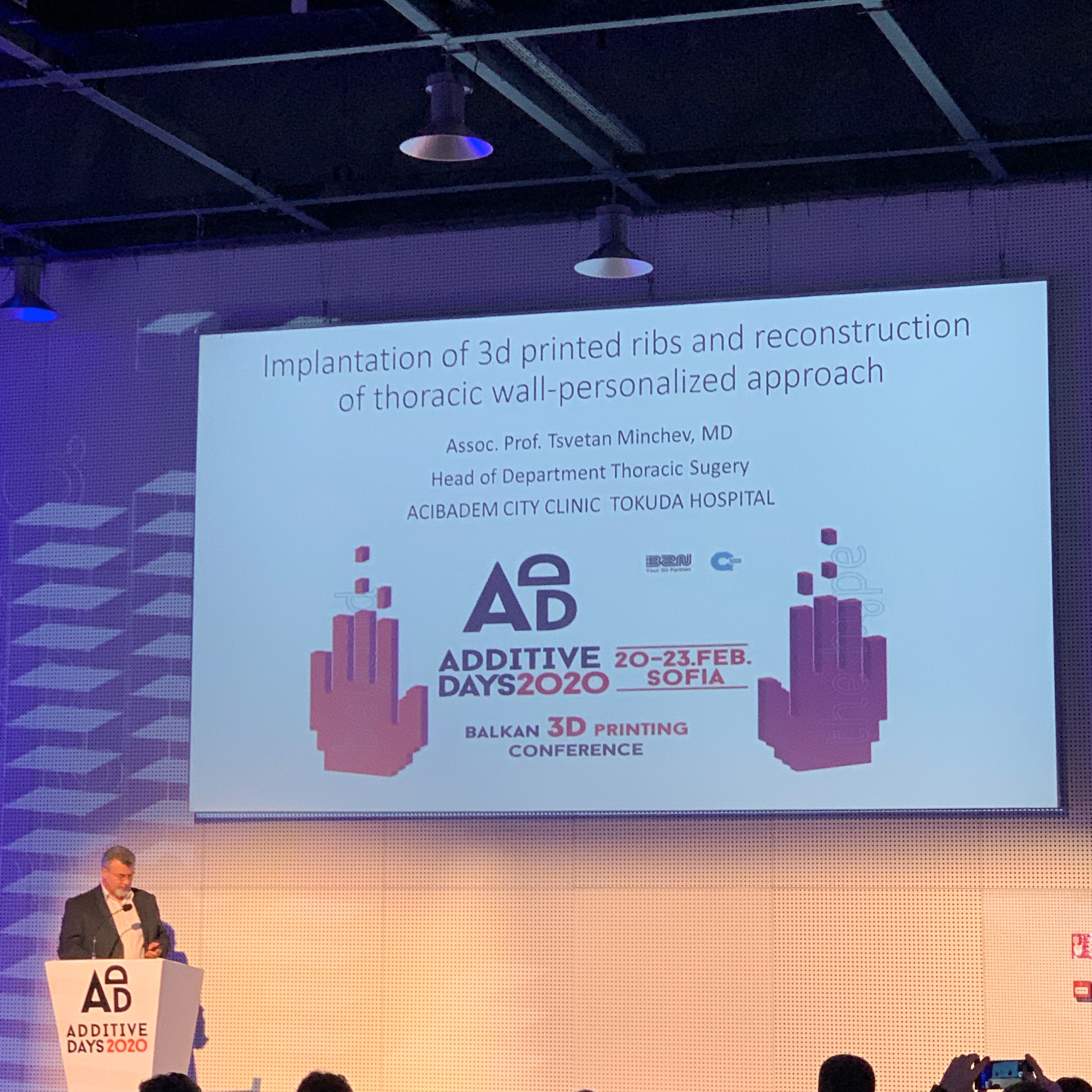 Now, he did preface that there would be some blood involved, but I honestly didn’t expect a five minute video showing the whole procedure in action. 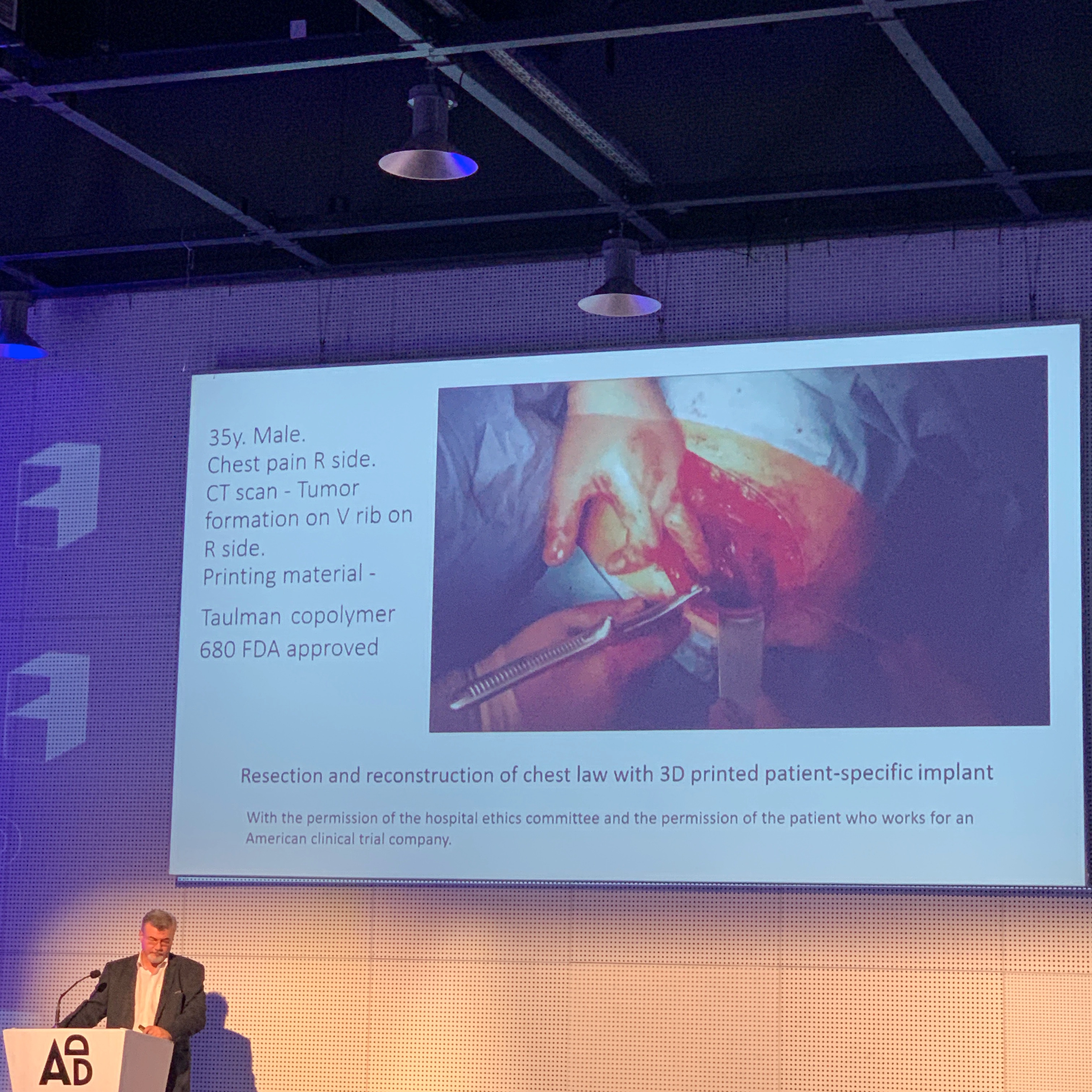 Prior to surgery, the ‘bad rib’ was scanned and the scan model cleaned up and prepared for printing. They used Taulman 680 co-polymer nylon to make a dozen copies and had them sterilized and ready to go. Bio chemical examinations showed that the material can be fully sterilized, and would not cause adverse reactions for the patient.

Following the extraction of the ‘bad rib’, the printed one was cut in the exact same shape, then affixed back to the rib cage. Because nylon is very tough to cut and shape, having spare copies on hand was a must. All of the cutting, sanding, and fitting was done mid surgery, with the whole procedure taking 8 hours start to finish.

A similar approach to printing implants was taken in Spain recently, with the implant printed in titanium by an Australian company who exclusively specializes in the field of medial research. 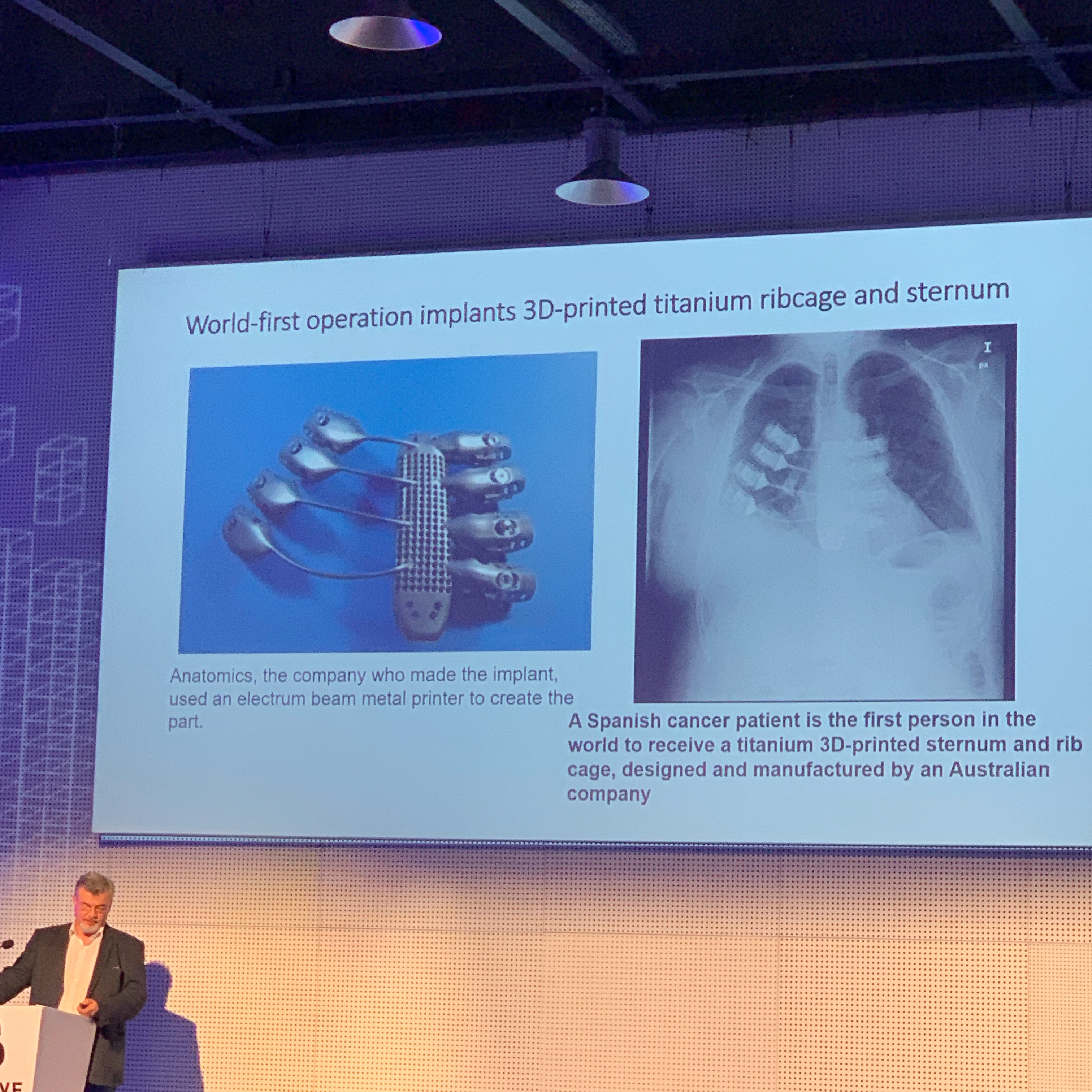 BigRep’s Vanessa Findling had a highlight reel of the company’s top projects, but I’ll just the e-bike real quick. 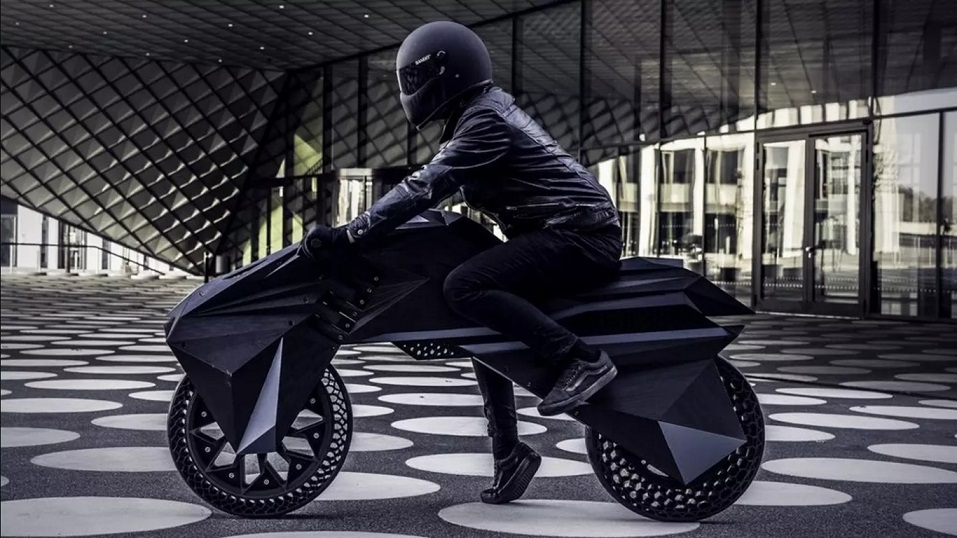 Nera is a fully 3D printed electric bike fully fit with all the bells and whistles you’d expect.

The bike is designed in such a way that it only consists of 15 separate printed parts - airless tires included, and can reach speeds of 150 km/h. That sounds a bit too much for a bike of such low mass, but I guess the overall weight of the chassis doesn’t impede the electric motor as much as a fully metal one would do.

Dr. Matthias Hoeh talked about successful business models with 3D printing - how and at which point in the development process can additive manufacturing be used to speed up manufacturing.

There were lots of numbers flying off every slide and the whole talk was very businessy, so I’ll just leave you with the following two: 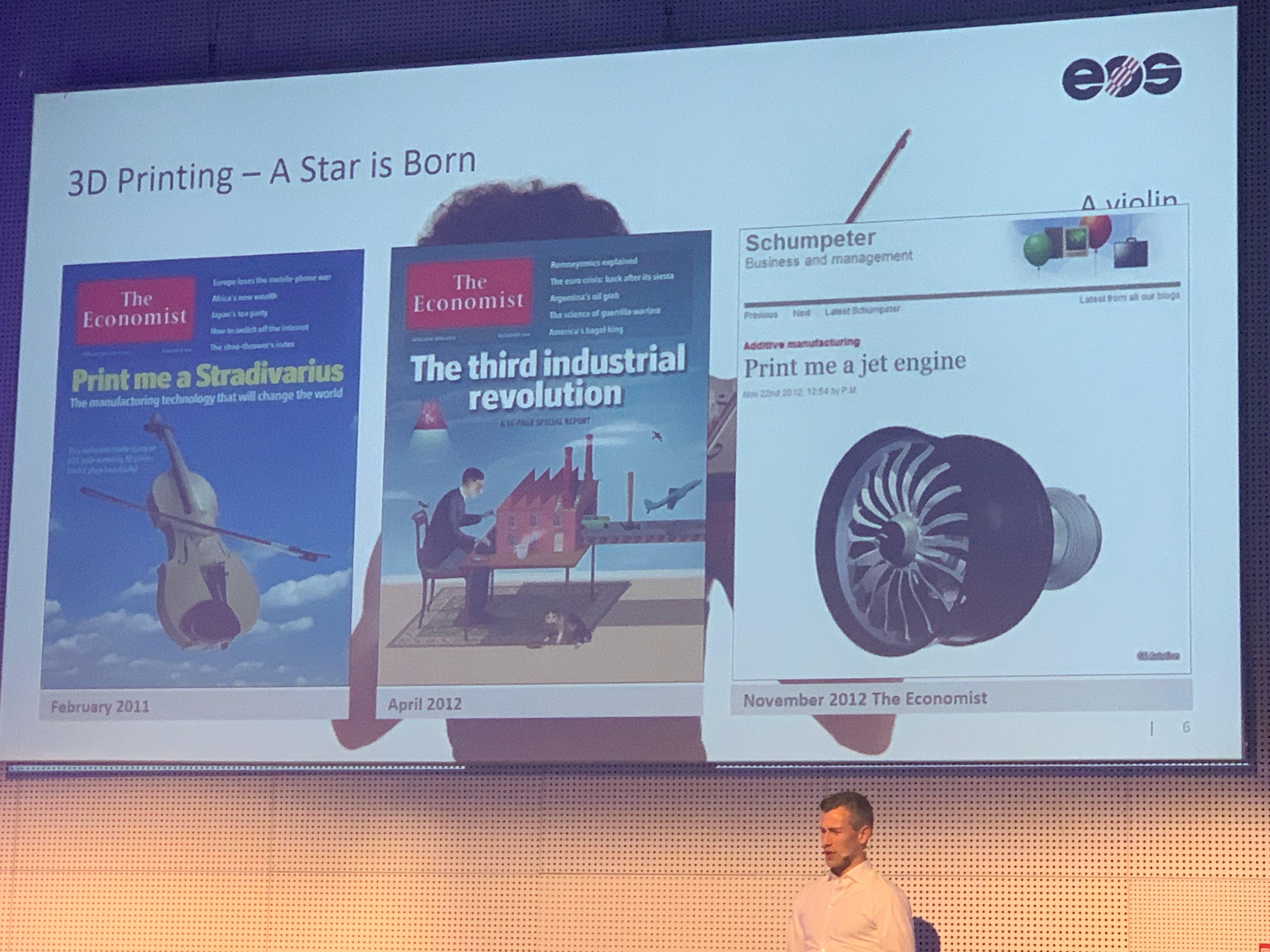 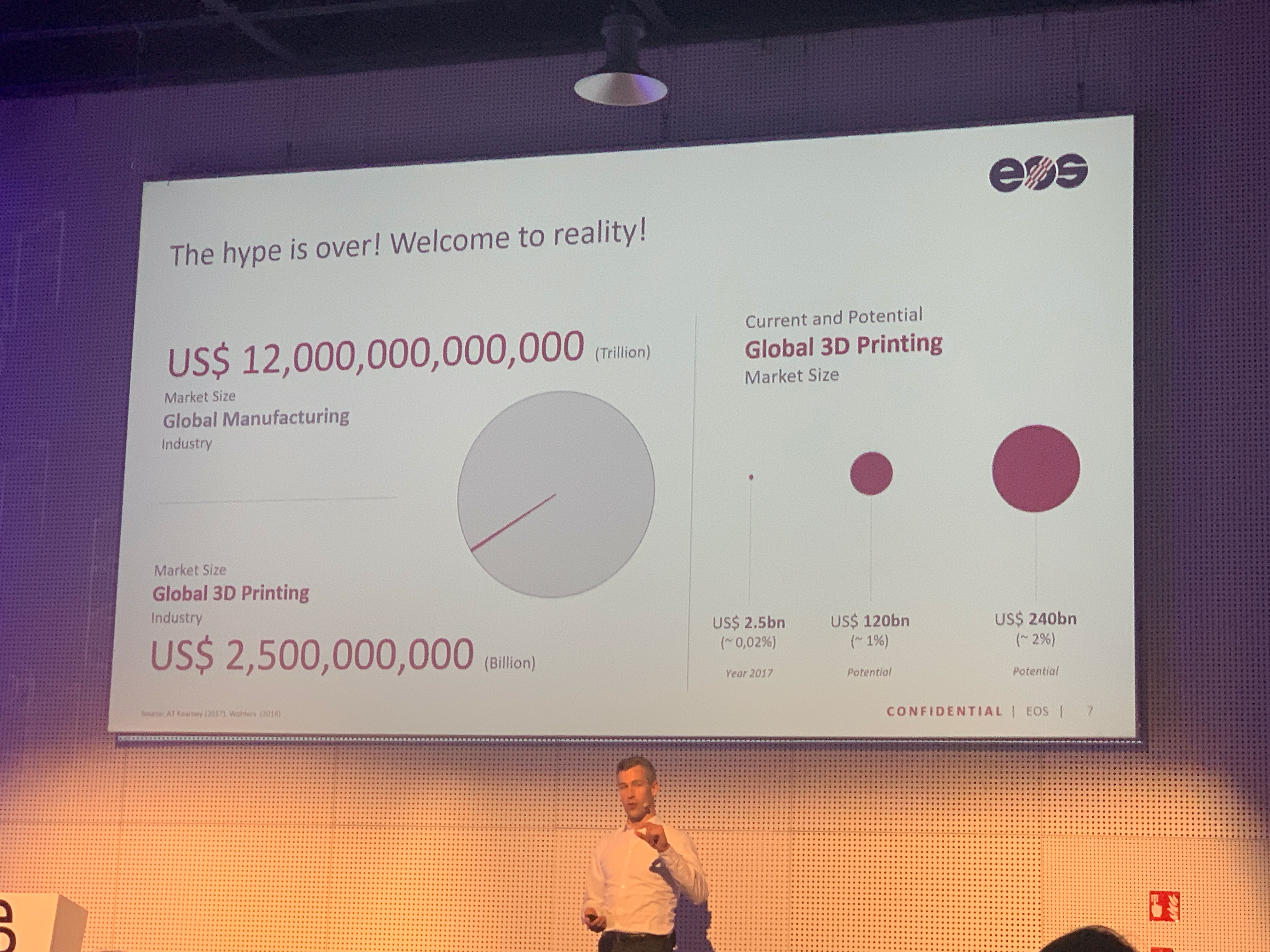 My friends over at SmartFabLab had a booth showcasing some of their recent projects along with a few new toys they’ve gotten recently. 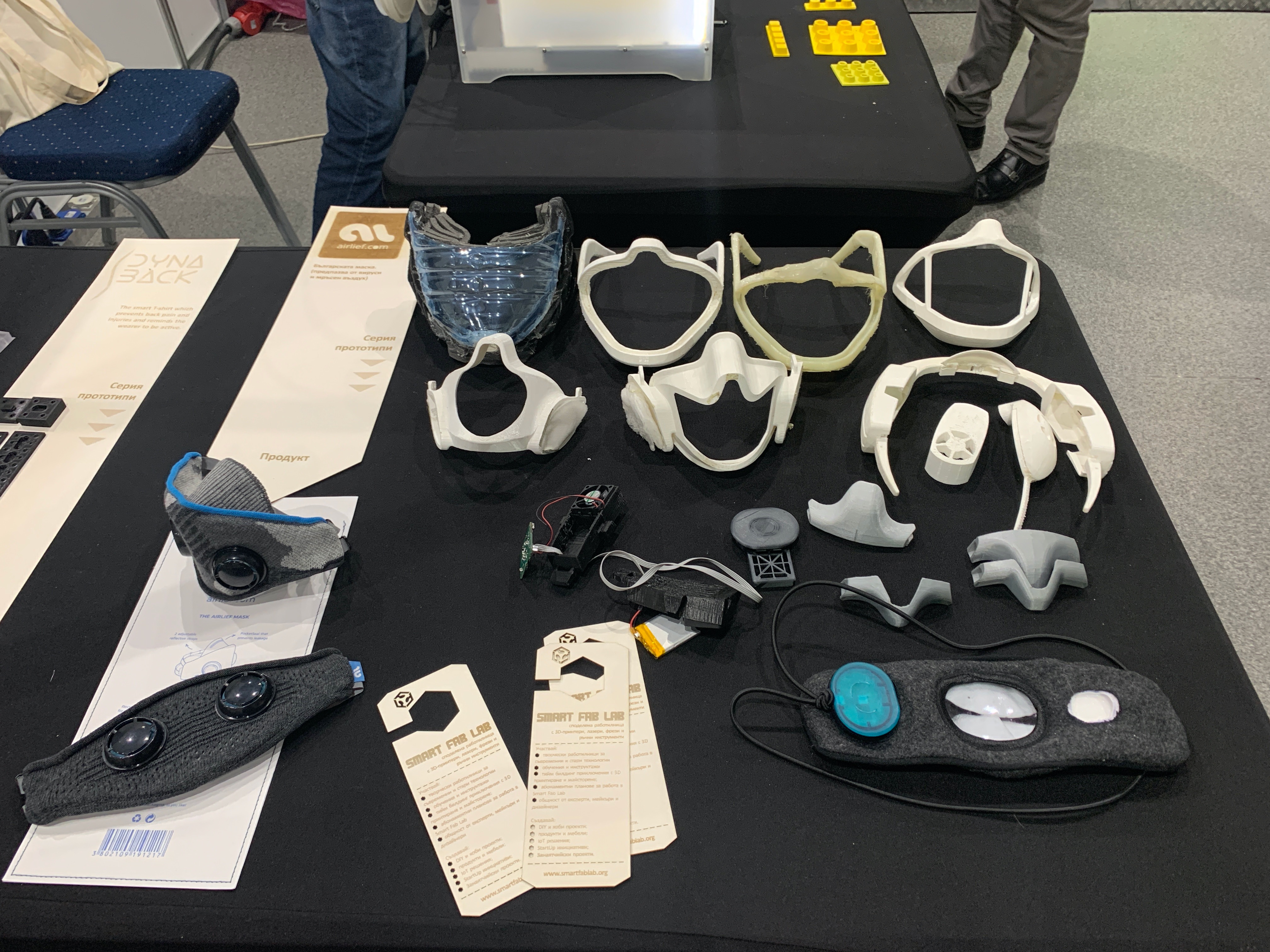 They’ve been iterating over their air quality mask and taken a new approach that is easier to manufacture and test. The first couple of prototypes heavily relied on 3D printed polyurethane frames that proved cumbersome to properly model and print. The prototype I remembers was also very tech heavy, but that came at the cost of increased price, so the electronics side of things was also streamlined.

They also showcased their new Mayku FormBox. Vacuum forming machines are used to make surface copied shells of objects by heating a thin plastic sheet and vacuum pulling it down until the plastic cools down. It basically works like this:

Although this type of manufacturing technique does not have the widest number of uses, it allows for exponential production of models with simpler/flatter shapes.

I also met the folks behind SolidFill - a high end CAD and additive manufacturing company in town. They’ve upgraded their machine portfolio with a couple machines and now offer metal and ceramic printing. 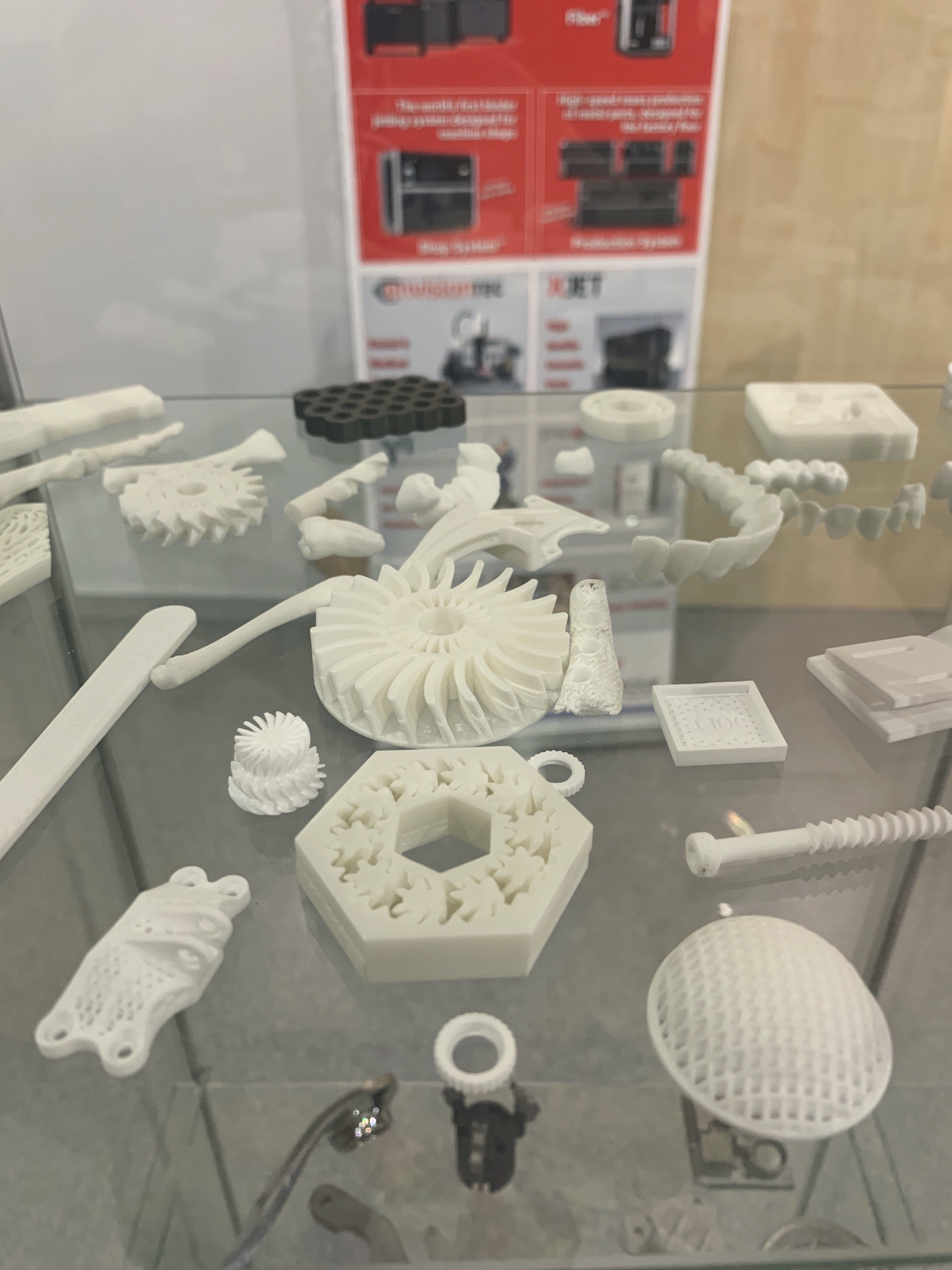 Ceramics have come a long way over the last few years. It’s no longer necessary to scale objects up, as advancement in this field has allowed new printing techniques that don’t shrink models while they are being cooled down. Ceramic prints are also much more durable now, and can withstand higher physical loads and mechanical wear. Further post processing allows glazing and polishing for better surface finish and wider applications, like dentistry and jewelry. 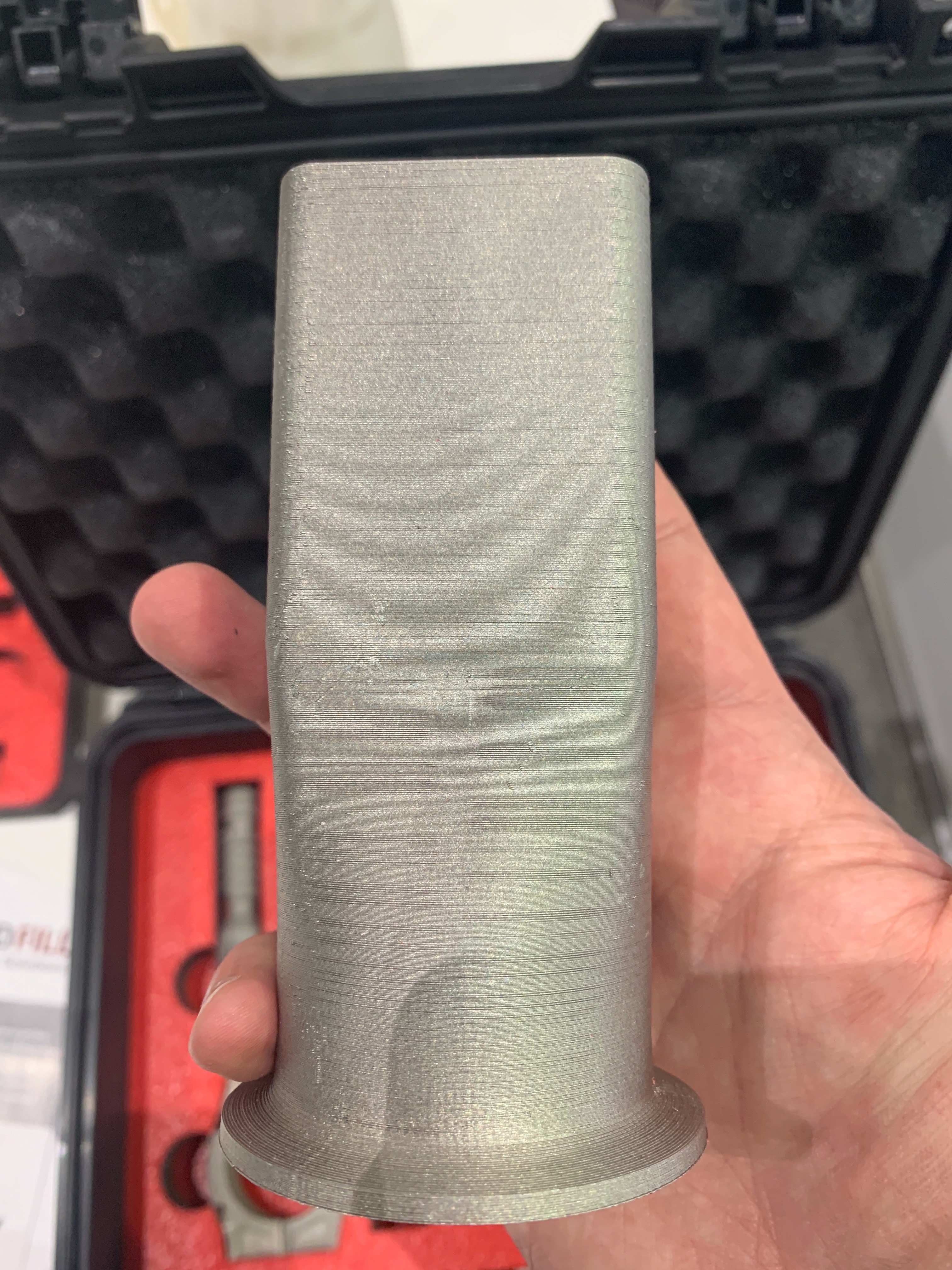 Apparently FFF metal printing is also a thing now. Most traditional metal printers work similar to SLS machines - that is, using powdered material which is selectively solidified using heat and/or lasers. The model above is also made out of metal power, but it is fed through a specialized extruder that solidifies it as it moves along. Although layer lines are clearly visible, they do not compromise the structural integrity of the model, so it is as strong as a cast one.

I knew the company specializes in large scale printers, but did not expect a machine that is actually taller than me! 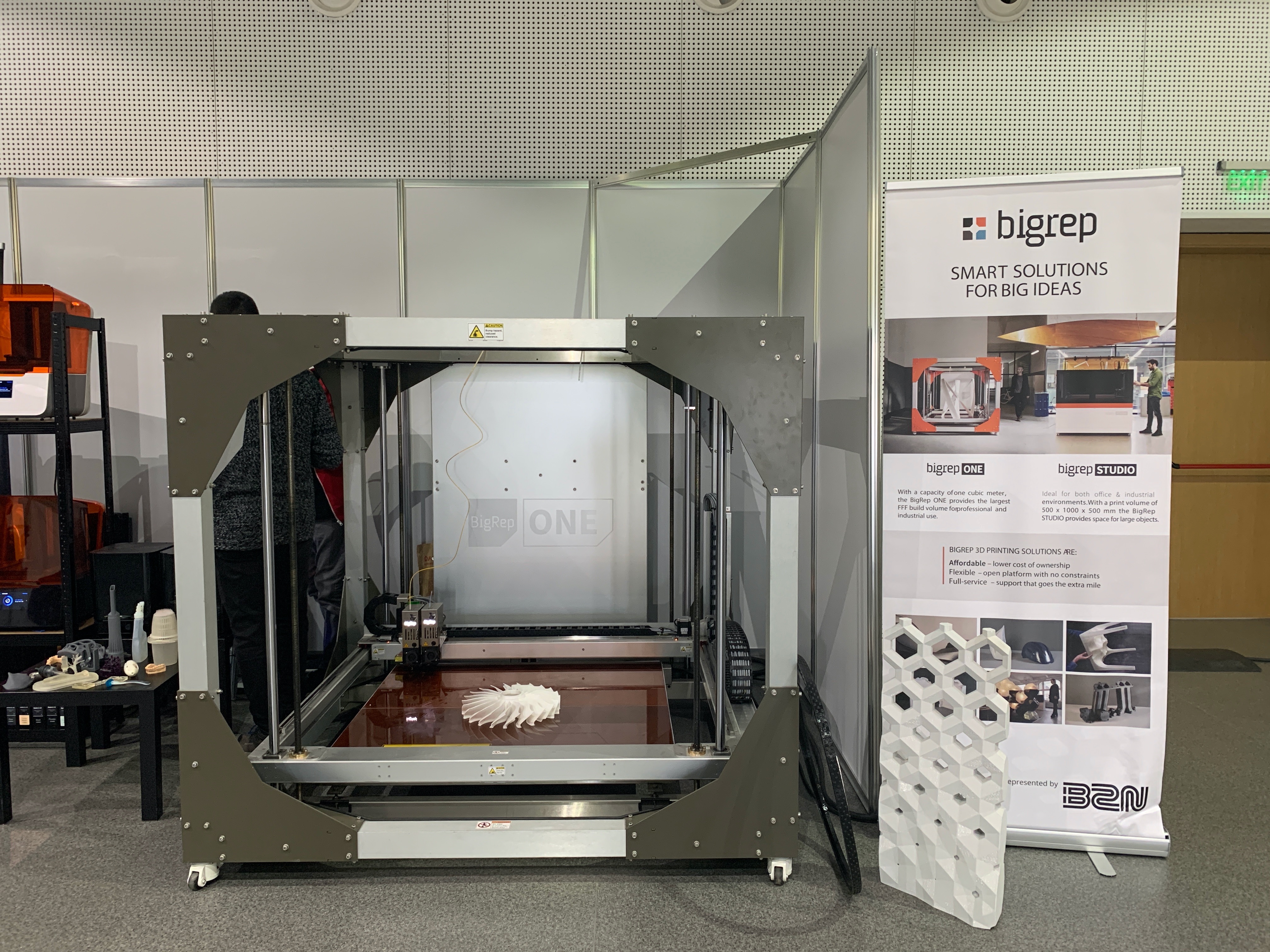 The exact work volume is 1 meter cubed and the dual extruders can be fed up to 400mm/s with the default nozzle diameter of 1mm. Talk about impressive - that’s four times the speed of most desktop printers, and over twice the nozzle size. So even though BigRep is designed to produce very big models, build time is considerably reduced because of the difference in resolution and speed of printing.

No wonder they’re printing cars on bikes in their design lab. Definitely worthy of the hype and cost that comes with it.

I had a blast at Additive Days 2020. There were many takeaways from all talks attended, new people met, and familiar ones I haven’t seen in a while. Missing the second conference day was a bit unfortunate, but hopefully they’ll upload footage from the whole event soon.

See you again next year!